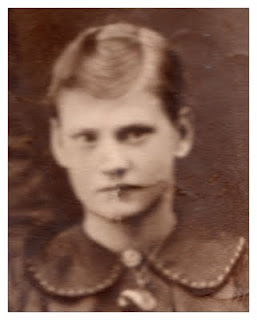 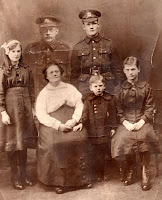 The final installment in my Family Six Pack mini-series brings us to the young lady on the extreme right of the photograph : my Auntie Miriam. She would have been just sixteen years old when the photograph was taken and already working in one of the Bradford woollen mills. The truth is that I know little about her youth and early middle age : she lived at home until she married - and that wasn't until 1942 when she was 41 years old. Obviously - as with many couples at this time - she had a lengthy courtship with her future husband, Frank, as I have pictures of them together a good ten years before they got married. Equally - as with many couples at the time - they never had children. 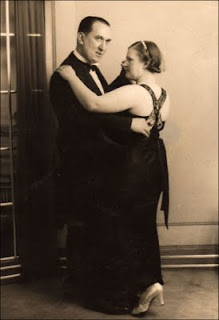 Miriam and Frank were not conventional in everything they did. In the 1950s they left their native Bradford and set up home in Great Yarmouth a seaside resort close to the Norfolk Broads. They opened a boarding house which Miriam looked after whilst Frank worked in a radio factory. At some stage in the 1960s they moved back to Bradford but within a few years had returned to the south, this time to the new town of Basildon.

Miriam's husband, Frank, was an eccentric character (even within our family which had more than its fair share). He was an early enthusiast of tape recorders and would spend hours recording the television adverts from the early years of commercial TV. Unfortunately his tapes were thrown away after his death which is a shame as I suspect they would be collectors pieces these days. He would also record an annual Christmas Message from himself and Miriam (and often Peggy the dog) which he would mail to us up in Yorkshire. On Christmas Day the family would gather at our house and it would be played just after the Queen's Christmas Day Message. One year poor Frank died and as these things happen it was between the time he recorded the annual message and the time it was played to the family. I have to admit that my eyes still fill up with tears - of laughter I am afraid - as I recall how we all sat around and heard him utter statements like "Greetings to you all from Frank who is far from home!" 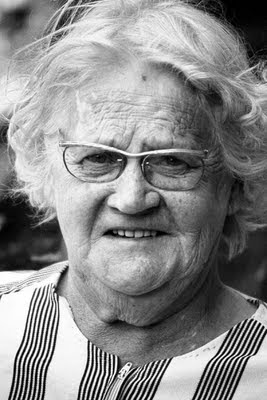 After Frank died Miriam returned to live in Yorkshire. She had a small cottage in the village where we lived and she would patrol the streets with the latest in a whole succession of small rat-like dogs. She was famous for her Yorkshire bluntness and a voice that could carry from one side of the village to the other. Her cottage was near the village bus stop and my brother and I would go to considerable lengths to avoid her. My brother would always tell the story of how one day he got off the bus and, as usual, ducked under the wall to sneak passed her window. As he got further up the road towards our house and began to relax a voice boomed across the Yorkshire streets : "Oy Bugger Lugs, where do you think you're off to?"

This concludes the Family Six Pack Series. No doubt I will come up with some more family history posts before too long.