The Trinity, The Latin Mass, And A Pint Of Bitter 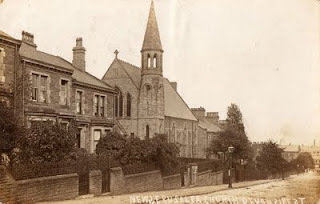 A nice adventure today, the start of which was randomly picking out a postcard for my weekly postcard slot. The postcard was from the collection of my mothers' Uncle Fowler and dates back to the first decade of the twentieth century. It is a real photograph of the New Jerusalem Church, Devonshire Street which - like so many of the cards in Fowlers' collection - is in the West Yorkshire town of Keighley.
Intrigued by the origins of the New Jerusalem Church, I tried checking it out on Google but came up with very little other than a reference to the New Church movement and the religious beliefs of the eighteenth century scientist, philosopher and theologian, Emanuel Swedenborg. They were a rather strange sect who rejected the approach of mainstream Christianity in relation to the Holy Trinity : in their view Jesus Christ, God and the Holy Spirit were all the same thing. The sect seemed to attract some fairly heavyweight followers during the nineteenth century, and William Blake, Elizabeth Barrett Browning, and Ralph Waldo Emerson were - at one time or another - influenced by the writings of Swedenborg. In the 1780s small churches dedicated to the teachings of Swedenborg were established, first of all in England and later in America. The churches were known as New Churches or New Jerusalem Churches and one of the very first to be established was in the then village of Keighley. By the end of the nineteenth century the New Jerusalem Chapel in Keighley had become too small for its growing congregation and a new church was erected in fashionable Devonshire Street. It is this church - built in 1890 - that features in the photograph on the postcard. I was anxious to see if the church still existed and - the day being unseasonably pleasant - I drove over to Keighley to search for it. And much to my surprise I found it. The New Church movement declined in popularity during the twentieth century and it seems that the building was sold about fifteen years ago. It was bought by the Roman Catholic Society of St Pius X : a group that still conducts services in the original latin and believes in "uncompromising fidelity to Catholic Truth and Tradition". 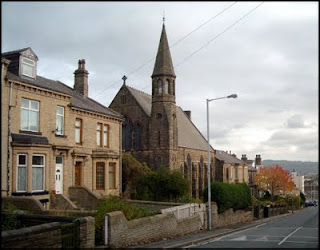 Confused by all this doctrinal debate and argument I limited myself to trying to reproduce the original postcard photograph which was taken over 100 years ago. As you will see, there have been changes but not as many as you might have expected. With thoughts of the Trinity and the Latin Mass still intoxicating my soul, I walked down the hill into Keighley and had a pint at the Boltmakers' Arms. If only all religious conflicts could be solved this way.
at October 28, 2009