101 Pubs To Drink In Before You Collapse : No. 1 The Old Bridge Inn, Ripponden 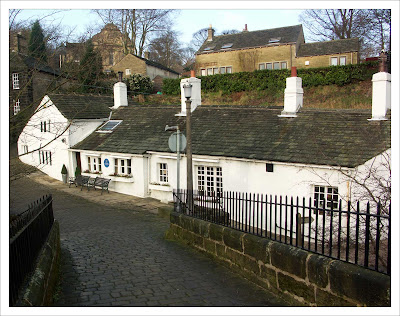 Imagine the scene. You are walking through a West Yorkshire village. The nearby Pennine hills scrape puddles of moisture from clouds en-route from the Atlantic to Siberia. But there is a freshness in the air that reminds you that you are alive, and why it is good to be alive. The sun breaks through the clouds and starts to warm the rich brown stone and buildings suddenly seem to come alive like stone reptiles reinvigorated by the sun's warming rays. The sounds of the modern world - the cars, the screeches, the bangs, and the buzzes - are buried beneath the sound of the Ryburn River racing down to the far off sea. You walk over an old stone packhorse bridge and there in front of you is a sight that is vaguely familiar. It is a sight that you have dreamt about ever since you became too old to dream of pretty young women. It is a perfect pub : warm, welcoming, and exquisitely beautiful. You have arrived at the Old Bridge Inn, Ripponden.

It is easy to was lyrical about the Old Bridge, it is that kind of place. A plaque above the door tells you that it's "probably Yorkshire's oldest hostelry", but dozens of similar plaques grace the walls of dozens of similar pubs within the county. If you insist on reviewing the evidence - records dating back to the fourteenth century and talk of Roman roads from Chester to York - at least step inside and do so over a pint of ale. That's real ale of course, it would be a sin to drink anything else at such an establishment. But if you simply can't take the taste of beer then go ahead and sin : until just over a hundred years ago the pub was owned by the adjacent church and therefore forgiveness is in as plentiful supply as Timothy Taylor's Prize Winning Beers. And whilst you sup your blessed beer or your sinful chardonnay, have a look around and marvel at the place : the crooked floors, the low-slung doors, the wooden tables, the uninterrupted, undiluted sheer history of the place. And marvel at the fact that it has not been over-prettied, nor turned into a Sunday Supplement bistro.
There has been a spate of books recently with titles like "1001 places to see before you die" and  "500 Books You Must Read Before You Expire". Well I have just come up with another one in the same series : "101 Pubs To Drink In Before You Collapse". And the first in the book is the Old Bridge Inn, Ripponden. Catch a bus, hire a train, hitch a lift. Do whatever you need to do. Just see it. 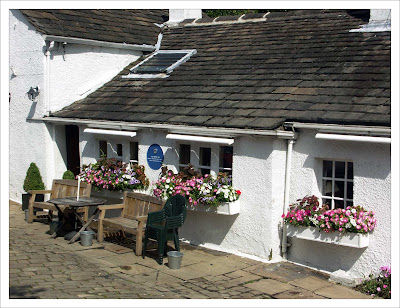