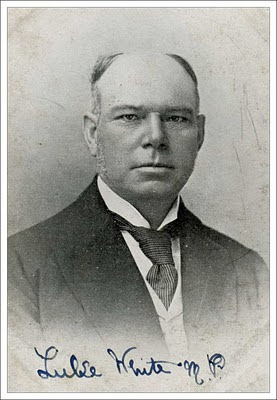 My Sepia Saturday offering this week marks a change from the usual family photo of Uncle Jim or Aunt Ruth-Annie in that the subject is no relation of mine. Just why a signed photograph of Luke White MP should have been amongst the photos and cards collected by my Great Uncle Fowler I have no idea. Whilst Sir Luke White - to give him his full title - was a Yorkshire Member of Parliament, he was from a very different part of the County. Luke White was born in, worked in, lived in and represented the East Riding of Yorkshire from his birth in 1845 to his death in 1920. He was a solicitor by training and from 1897 he served as the Coroner for the East Riding. He was first elected to Parliament as a Liberal Party Member in the 1900 election and re-elected in 1906, and the two elections of 1910. He served in Parliament until the end of the Great War when he announced that he would not be fighting the December 1918 election due to his declining health. He only had a short retirement, and not a particularly happy one. After the election it emerged that White had debts of over £21,000 (the equivalent to about £1,000,000 these days) and he was summonsed to attend Scarborough Bankruptcy Court. He didn't attend and initially a warrant was issued for his arrest but was later withdrawn given his declining mental and physical state. He died a few months later.
It's a simple little picture with a signature that looks as if it has been quickly added. You can almost imagine Sir Luke sat at his desk in the Palace of Westminster signing a pile of stock photos and sending them out to constituents and the like. Hoping it might bring a few more votes. Hoping it might cement his position in politics, his position in society, his position in history. He could never have imagined that 100 years later the same photograph would be flashed across the world as a Sepia Saturday post. But there again, he could never have imagined that he would end his days in the dock of the Bankruptcy Court. It's a funny old world.
Take a tour of the other Sepia Saturday posts by following the links from the Sepia Saturday Blog.
at September 17, 2010