A Few Answers But A Lot Of Questions 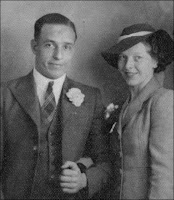 I left you last time with a question and a promise to try and find an answer. At the Pub Quiz on Friday (in answer to your question B&N, a pub quiz is like a trivia quiz with the added advantage of alcohol) I did manage to ask our question master, Cousin Dave, about the identity of the couple in the wedding photograph only to be told that he had no idea and he had never seen them before in his life. If you look through the comments to the last post you will see that, on sobering up, he later changed his mind and suggested that they might be George and Queenie Obey. George Emile Obey (1916 - 1992) was a cousin of David's (and therefore a cousin of the Good Lady Wife) and the records suggest that he married a certain Janet Cubbin in 1940. The date of the wedding and the style of clothes would seen to fit in with this suggestion. But before you decide that all our questions have been answered, I need to point out that Cousin D was not born until 1944 (or so he assures me) and therefore how could he have attended a wedding in 1940. The explanation for the fine penmanship of a two-year old put forward by Chairman Bill in a comment to the last post ("the standard of education in the 40s was obviously much better than today") would hardly seem to cover such a premature arrival. 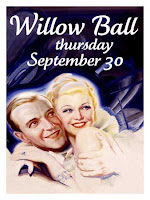 Another question has been occupying my mind over the last couple of days : who should I invite as my guest to the Third Annual Willow Ball. I wasn't able to attend last year and therefore I am determined to make the trip this time around. But who should I take with me? The Good Lady Wife doesn't travel well in the early morning (when the moon is rising in Willow Land the morning is breaking over Bog Green) and therefore I have invited an alternative date. The only problem is that however many times I e-mail her, I can never get a straight answer to my questions. When I asked her what she might be wearing, she simply quipped "brevity is the soul of lingerie". When I checked to ensure that she could hold her liquor she shot back "I like to have a martini, Two at the very most. After three I'm under the table, after four I'm under my host" (Willow you might want to lock up your men-folk). 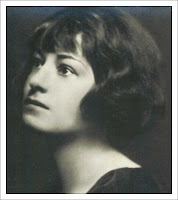 Not having seen a picture of her for some time I asked her to send me one and I was rather surprised when it arrived as she doesn't seem to have aged at all. By my calculations she must now be 117 years old, so whether or not this is a faithful representation of her is a question that we will only find the answer to on Thursday September 30th.  But whatever she looks like, I think that we can be pretty sure that, with her around, it will be anything but a boring evening. There is no question of that.
at September 13, 2010