It's Them Picturedromes That Spoiled Me 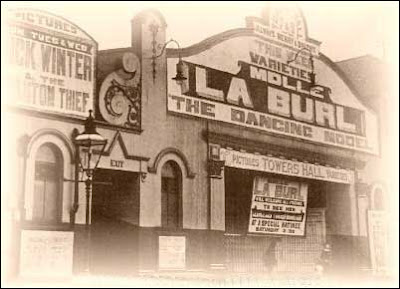 I seem to have spent much of the day reading old newspapers, first of all in the uncomfortable setting of Bradford Local History Library and more recently on-line via the excellent British Library 19th Century Newspaper Database.  I came across the following story whilst I was looking for something else and I thought I would share it with you. It comes from the Keighley News of the 29th July 1911.
JUVENILE HOUSEBREAKERS AND THE CINEMATOGRAPH
At Bradford City Police Court on Tuesday, Harry Bennett (14) of 25 Osborne Street and John Taylor (13) of 117 College Road were charged in three cases with housebreaking and stealing jewelery and money to the total of £28. Bennett's mother gave him good character, but Taylors' father said he had previously taken money belonging to his sister. In reply to the charges, Taylor said, "It's them picturedromes that spoiled me. I've seen it done. When we first went in  we broke a window and went in". He mentioned several Bradford picture places he had visited. Bennett, who cried during the proceedings, remarked to the magistrates, "Please Sir, I am as bad as him (Taylor)". Taylor was ordered to be sent to a Reformatory, and Bennett was bound over for two years.
at February 08, 2011