Skinny-Dipping In The National Archives 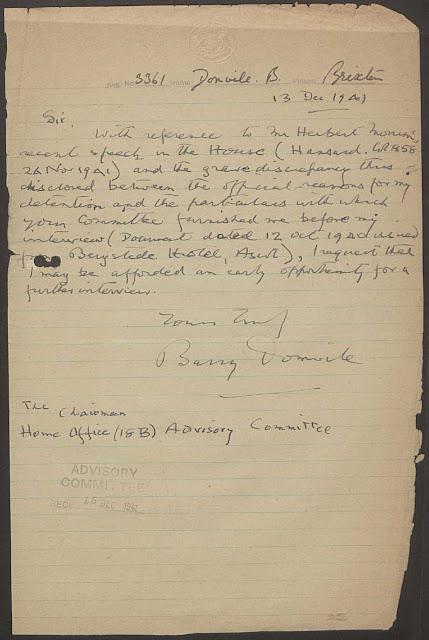 Regular readers will know that I tend to get sidetracked. I can set off to Huddersfield and finish up in Wakefield, both literally and metaphorically. I have managed to get sidetracked so many times this week that I have actually forgotten what I set out to do. I remember going to Bradford Library yesterday and getting sidetracked by their old newspaper collection. Today I have managed to get myself sidetracked by skinny-dipping in the National Archives (figuratively speaking). I have now abandoned all plans and objectives for the rest of the week and declared it National Sidetracked Week.
Now, where was I before I got sidetracked by being sidetracked? Ah yes, skinny-dipping in the National Archives. For no particular reason I downloaded the files relating to the appeal by Admiral Sir Barry Domvile against his internment during the Second World War. What I really love about on-line archives is seeing the original document (or the scans of them) : the scrawled handwriting on prison notepaper, the layer upon layer of official stamps, the torn and creased notepaper. Together they somehow breathe life into history.
Not that I want to foster any great sympathy for Domvile who, it would appear from reading the files, was a unrepentant fascist and anti-Semite. One of the main reasons for his interment - in addition to his friendship with and support for Hitler and the other leaders of the Third Reich - was the fact that he had set up an organisation called "The Link" in the late 1930s to encourage Anglo-German friendship. The organisation came under investigation by MI5 and was closed down in 1939 shortly after the outbreak of the War. However in 1940 it was resurrected by a young MI5 officer in order to try and lure prominent Germans into the hands of British Intelligence. Some claim that it was this particular ruse that was behind the flight to Britain by the Deputy Fuhrer, Rudolph Hess.

And the name of the young MI5 officer? Why none other than Ian Fleming who, after the war, went on to write the James Bond books. Now that is a story worth getting sidetracked for.
at February 09, 2011