Open Letter To Kirklees Metropolitan Council : Today We Are Naming Of Streets

Just around the corner from where I live, used to stand a large house with a substantial garden. And then one day the bulldozers moved in and knocked the house down and dug the garden up. Where once grew Spring tulips, there now grows "units of elegant, bespoke living". Where misty raindrops once dripped from a tennis court net, now cold asphalt pours to form a new road. And according to a notice pinned to a lamp-post, that new road will be named Delamere Gardens. The Local Authority want to hear from any person who might be aggrieved by such a proposal. I have missed the deadline, but I will submit my views anyway. 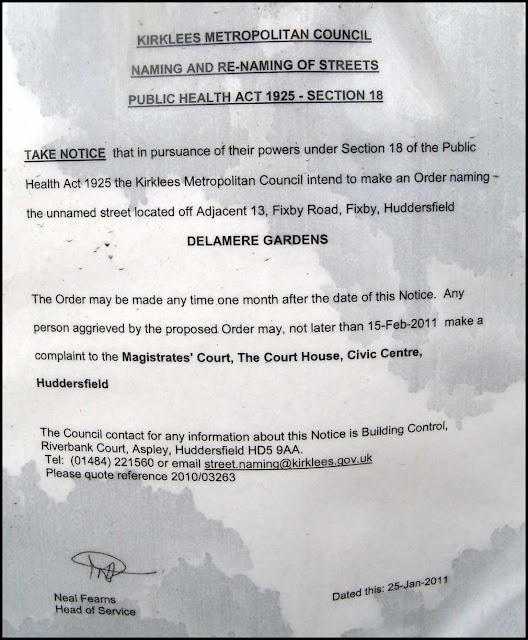 I am writing to you with regards to your proposal to name the new road you are planning to built to service the luxury development of 14 bespoke contemporary homes in Fixby, Delamere Gardens. I write not because I am aggrieved by the development itself - merchant bankers must have something to spend their bonuses on, after all - but by the choice of name. "Delamere" is such a meaningless homage to aspirational vacuousness, with no links to the area it has been chosen for. "Gardens" is, if you will pardon the expression, an oxymoron, as it is intended to describe something that used to be a garden and is now little more than a bed of concrete and asphalt.
Now I know what you are going to say, so perhaps I can save you the effort. You are going to say that the name of the house that formally occupied this desirable plot of development land was "Delamere" and therefore the name follows a fine tradition. But, I ask you, what kind of tradition is that. The owner of the old house obviously chose a name so that it would sound middle class, middle England, middle everything. If the word Delamere means anything it refers to a wood in Cheshire or is a corruption of the Old English meaning "of the lake". Look around you, we are nowhere near Cheshire and I will give you £10 in Council Tax for every lake you can see.
No, if you want the name of the new road to connect to the former owner of the house, why not call it Kagan Gardens (after Lord Kagan who lived there) or Gannex Garden (after the coats that made him is fortune and enabled him to buy the house). Or you could name in Armley Avenue after the prison he spent time in for tax evasion in the 1980s. Perhaps we would be better to forget the history : name it in the contemporary style, in commemoration of the times within which it has been laid out and built up. "Hedge Fund Crescent" has a certain ring to it, as does "Speculation Road".
Yours, as ever,
Alan Burnett
at February 22, 2011