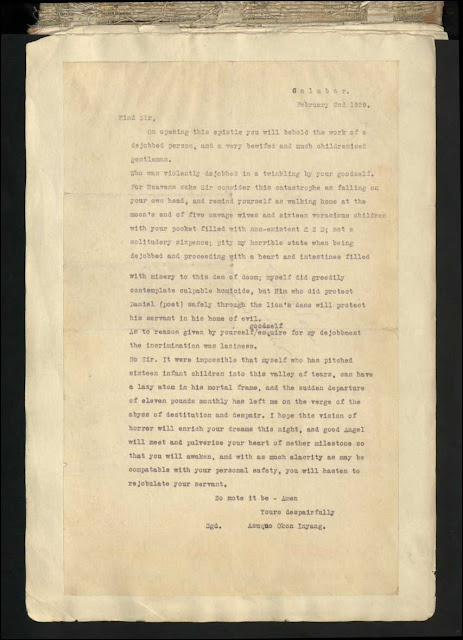 National Archives can be stuffy places, full of the official confetti of diplomatic relationships or the dusty detritus of long-forgotten official reports. But not always. Occasionally an archivist will spot an object of timeless beauty and will help to preserve it for the enjoyment of generations still to come. Such is the case with the following letter which has just been published as part of the UK National Archives contribution to the magnificent Flickr Commons Initiative. It is a letter from a certain Asuquo Okon Inyang, who, it would seem, had been employed by the British Embassy in Calabar, Nigeria before being dismissed in February 1929. No further comment is necessary other than to reproduce the full text of the letter which is as follows:
Calabar, February 2nd 1929.
Kind Sir,
On opening this epistle you will behold the work of a dejobbed person, and a very bewifed and much childrenised gentleman.
Who was violently dejobbed in a twinkling by your goodself. For Heavens sake Sir consider this catastrophe as falling on your own head, and remind yourself as walking home at the moon's end of five savage wives and sixteen veracious children with your pocket filled with non-existent £ s d; not a solitudery sixpence; pity my horrible state when being dejobbed and proceeding with a heart and intestines filled with misery to this den of doom; myself did greedily contemplate culpable homicide, but Him who did protect Daniel (poet) safely through the lion's dens will protect his servant in his home of evil.
As to reason given by yourself (goodself) esquire for my dejobbment the incrimination was laziness.
No Sir. It were impossible that myself who has pitched sixteen infant children into this valley of tears, can have a lazy atom in his mortal frame, and the sudden departure of eleven pounds monthly has left me on the verge of the abyss of destitution and despair. I hope this vision of horror will enrich your dreams this night, and good Angel will meet and pulverise your heart of nether milestone so that you will awaken, and with such alacrity as may be compatable with your personal safety, you will hasten to rejobulate your servant.
So mote it be - Amen
Yours despairfully
Sgd. Asuquo Okon Inyang
How I wish that I had written such a letter. All that can be said is that if Mr Inyang didn't get his job back the British Empire didn't know what it was missing and was a duller place because of it.
Speaking as a very bewifed person I need to announce that the same wife has the week off next week and therefore I will be going on an extended shopping trip and will not be able to post as much as usual, although I will try to take a photograph or two between Department Stores and add them to my Picture Post Blog. Yours despairfully, AB
at February 13, 2011

Email ThisBlogThis!Share to TwitterShare to FacebookShare to Pinterest
Labels: Archives