One Pin, Two Views 1 : Where To Start

At some point last year, Jennyfreckles of the blog Salt and Light and I started to discuss, via comments on each others' blogs, how different photographers approach the same location. As we live only a few miles away from each other we often find that we are taking photographs of places the other has featured on their blog and we became intrigued by the different approach two people might take to the same set of stones, hills, mills and moors. And so we came up with a game (or an exercise, or a project) to investigate this phonomenon. We would stick a pin in a local map until we came up with a village that neither of us was familiar with and then each of us, independently, would visit the village and put together a small portfolio of photographs. This is not a competition (if you are familiar with Jennyfreckles'  work you will know that I could never win such a competition) but a way of assessing how much of what a photographer sees is, in fact, a reflection of themselves. We have decided to publish a selection of our photographs of the West Yorkshire village of Thornton (the place where the pin came to rest) over the next week. I have no idea what images Jenny is going to come up with, but I will be very intrigued to find out. 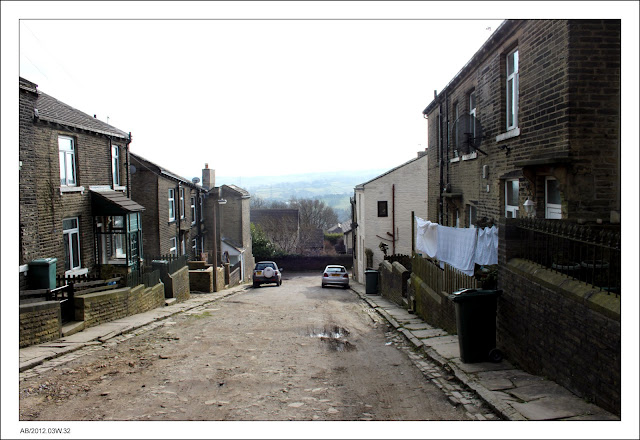 Where does one start? I suppose one could start with the famous bit of Thornton which is the house where the Bronte sisters were born before the family moved a few miles up the road to Haworth. Or one could feature the beautifully curvaceous Thornton railway viaduct which crosses the valley like an ancient relic: sans trains, sans rails, sans everything. But what really struck me about the village of Thornton, which is only two or three miles from the centre of busy metropolitan Bradford, was the way the little streets of old stone terraced houses threaded up the side of the valley, linking nothing with nowhere, pasture with moorland. I can't remember the name of this little street, but if you Photoshopped out the two cars and drained the shot of colour, it could have been taken at any point during the twentieth century.

This experiment of ours is about our own personal interaction between a place and ourselves, and this, I suppose, makes it an exercise in psychogeography. So this was my first interaction, the first point where I felt compelled to press the shutter and capture Thornton through my eyes. Which makes it a very good place to start.

NOW YOU HAVE READ THIS, GO ON OVER TO SALT AND LIGHT TO SEE THORNTON THROUGH JENNYFRECKLES' EYES.
at March 19, 2012