Treading The Green that Fowler Trod 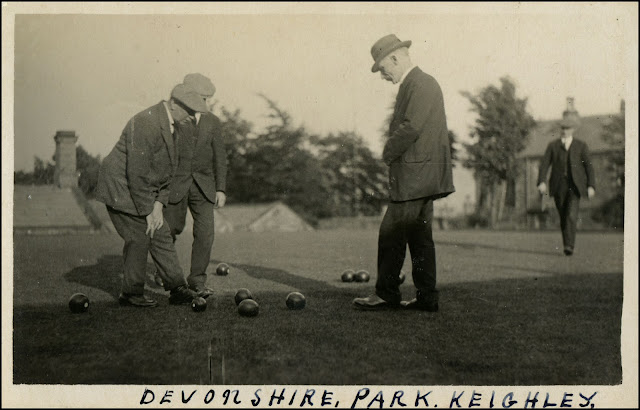 The new outdoor crown green bowling season starts next week. Following a winter of rigorous practice on Huddersfield's magnificent indoor bowling facility, I can reveal that Denis and I are just as cack-handed as we ever were and our one hope of matching Isobel and Sue during the up-coming season is in the development of a bowling App for our iPhones. (Note to App developers : surely the creation of something which takes into account the gradient of the crown, the weight of the bias, the lie of the jack and calculates a suggested road cannot be beyond an appliance that can pinpoint a gnat sneezing in the Sahara Desert).

To mark our return to the outdoor green at Cowcliffe - ah the resonant clack of bowl and jack, the happy click of glass against glass - I thought I would post one of the postcards from the collection of my great Uncle, Fowler Beanland. This photograph must have been taken 100 years ago but you can still see the same stances, the same calculating looks that measure the respective distance between jack and bowls, the same purposeful stride down the green after delivering your winning bowl, on countless crown greens across the north of England.

Devonshire Park in Keighley still exists but as far as I can tell there isn't a bowling green there any more. I must take a trip there soon and investigate matters. It would be rather fine to tread the green that Fowler trod.
at March 28, 2012