Nice Morning For The Revolution 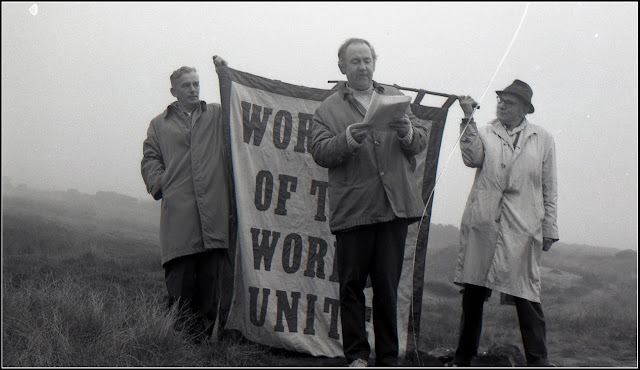 It was the best of times, it was the worst of times, it was the age of wisdom, it was the age of foolishness : it was the summer of 1968. In Paris, the Sorbonne was under attack by riot police, in cities all over the world people marched against the war in Vietnam, and on Blackstone Edge we held a commemorative meeting. I remember how this curious gathering came about; I was at a Young Socialist meeting in Halifax and I suddenly said "what we need is an anniversary". The reference books were consulted and Blackstone Edge which is high on the moors between Halifax and Manchester was chosen. In 1846 the great Chartist leader, Ernest Jones, led an army of workers out of the mills of Lancashire and onto the high moors to meet up with their comrades from West Yorkshire. The Chartists were demanding votes for ordinary working people, the abolition of the Corn Laws and a host of other political reforms. At the gathering high on Blackstone Edge, Jones, who had the reputation of a fine poet and orator, addressed the meeting. He later wrote a song to commemorate the gathering:

But waved the wind on Blackstone Height
A standard of the broad sunlight
And sung that morn with trumpet might
A sounding song of liberty!

When a small band of Halifax socialists clambered back onto the moors at Blackstone Edge in 1968, the wind didn't wave nor was the sunlight broad. In fact the moors were smothered in a thick mist. But it takes more than a damp morning to postpone the revolution, so we took our banners and gathered at a spot close to the track of the old Roman road. That legendary local socialist, Tim Enright, read the speech that Ernest Jones had made 122 years before. Then we sang The Internationale and as we did so the mist miraculously lifted. And all of a sudden we noticed an elderly couple walking down the Roman road with their dog. It must have been strange for them, to be walking high on the moors, to hear singing, the mist to lift, and there before them is this strange group of left wing radicals gathered around a banner. In the best traditions of these parts, they didn't bat an eyelid. They merely looked up, nodded and said "nice morning for it"
at March 26, 2012