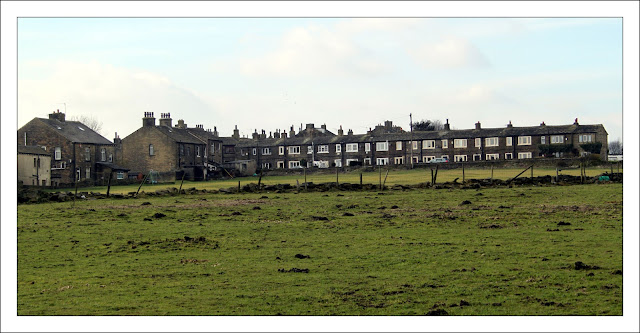 Much of the village of Thornton is constructed along the side of a valley. When the settlement reaches the top of the valley-side it contents itself with sending thread-like filaments out into the green of the rain-rich fields. These stone terraces thrust out into the countryside and then seem to almost lose interest.

The second photograph is merely an enlargement of part of the first photograph. Look at the chimney-pots. These houses received no shelter from the valley, their little rooms were under constant attack by a wind that was being funneled down from the Arctic tundra. But they were built near seams of coal which delivered heat to the rooms and smoke to the atmosphere.


Stone and smoke and mucky washing hanging out on a line.
Thornton.


This is the second part of a short series in which two photographers - myself and Jennyfreckles - examine the same village from different perspectives. To see Jenny's second photograph in the series go over to her blog : SALT AND LIGHT.
at March 20, 2012

Email ThisBlogThis!Share to TwitterShare to FacebookShare to Pinterest
Location: Thornton