Excavations 1 : A Pint Of Pennine Bitter With Champion Jack Dupree 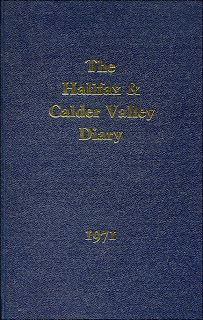 A Summer series highlighting some of the discoveries made whilst de-cluttering the back passages of my house.


My progress into the fabled back passage is currently blocked by a large inflatable exercise ball which I was persuaded to buy a couple of years ago. I had been informed that all I needed to do was to sit on this contraption whilst I watched Coronation Street and the micro-balancing involved would cause me to lose three pounds in weight per week. I never got the chance to prove the theory as on the first day I fell off the bloody thing and seriously damaged my shoulder and I instantly consigned the ball to the dusty extremities of my storage room. Not having the courage to extricate the blockage at this early stage I managed to reach around it in order to produce my first find - a Halifax and Calder Valley Diary dating from some forty years ago.

I am not sure how I acquired this rather plush diary - it had clearly been produced for Councillors on Halifax Town Council and it contains long lists of Council meeting dates, Committee Chairmen and the like. But acquire it I did, and it is full of jottings and appointments in my own handwriting. 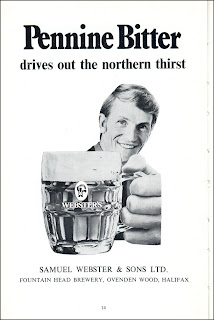 Before I get too much criticism for defrauding the Local Authority by misusing Council property, I should point out that such mock-leather bound goodies were paid for by local businesses who advertised in them. And looking back from four decades in the future, it is not the scribbled appointments that are the most intriguing, but some of the adverts for businesses that have long since faded and died. Samuel Websters' Fountain Head Brewery is now a housing development and the northern thirst must forever go unslaked. Would I have been drinking a pint of Pennine Bitter after attending a lecture on January 20th on "What is Economic Rent?" or listening to Champion Jack Dupree sing on Friday the 22nd? In case you are wondering why I was listening to that great New Orleans blues player in 1971, I must point out that, at the time, he was living in a council house at the bottom of Ovenden Way in Halifax. He would often claim that he came to Halifax by accident when his luggage and possessions were sent to Halifax, Yorkshire by mistake instead of Halifax NS where he was supposed to be doing a gig. Whatever the reason, he remained with us for about ten years and provided a generation of Yorkshire people with a unique insight into the music of the deep south. 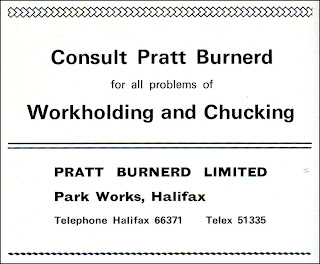 Another advert from that 1971 diary advises us to "consult Pratt Burnerd for all problems of workholding and chucking". Now I strongly suspect that both "workholding" and "chucking" are something to do with machines or engineering or something oily and noisy like that (I say this in order to stop my brother writing in to point such things out and yet again highlight my ignorance of all things practical, wholesome and constructive).

The diary dates from my time at University and I see on the 3rd of February I was introducing a seminar on the subject "what is the working class?" Whatever I may have said it was, it still existed in the Calder Valley. It made chucks and lathes, it wove rugs and covers, it brewed beer and it made toffees. 40 years later there is little industry left. There are call centres and offices where the machines used to be and there are supermarkets and retail parks where the mills once reigned supreme.

But I need to avoid becoming maudlin or I will never progress in my excavations. Time for a pint of Pennine Bitter and some Champion Jack Dupree.