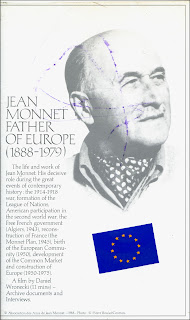 A Summer series highlighting some of the discoveries made whilst de-cluttering the back passages of my house.


Following my post the other day, it was my friend Jennyfreckles who asked the key question : "is the diary a Keep or a Throw?". The answer, of course, is that it is a Maybe. As I have mentioned before we are part of a special generation, the first generation of digital curators. We have the possibility of not only saving and storing contemporary objects, but also saving some of the vanishing objects of the past from obliteration and ensuring that they leave behind a timeless digital memory. Before explaining my decision in relation to the diary, let me move on to the object that was immediately below the diary : an eleven minute VHS Video entitled "Jean Monnet, Father of Europe (1888-1979)"

I remember acquiring this tape when I used to do work for the European Commission twenty or so years ago. It was one of the many give-aways produced by the Information Directorate of the Commission. There were rooms in the Berlaymont Building in Brussels stuffed with such things and I would often help myself to a few when I was there in order to give to objectionable cousins as Christmas presents. I no longer possess a VHS video player and therefore the tape is of little use to me and I have checked on-line and discovered that a couple of copies of the film still survive in academic libraries in Europe and America. I therefore feel completely justified in dropping the tape into the "Throw" box (cue sound effect of tape falling into rubbish bin). A similar search based on the Halifax and Calder Valley Diary 1971 reveals that the only on-line mention of such a volume links back to my post of a couple of days ago. If I throw it, it will be lost forever and a research opportunity for all future generations will follow it into land-fill. What I should do is to digitise it, but I fear that such a course of action might delay my de-cluttering timetable. The diary, therefore rests in the "Maybe" box. 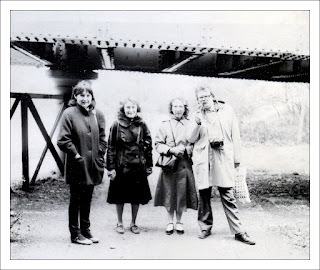 I have no such problems with the photograph I found lodged between the diary and the video, I have scanned it and I hereby make it available (copyright free) to the rest of the world. Not that the copyright is mine to renounce as it is that strangest of animals in my collection - a picture which features me. Where it was taken I have no idea but I would guess it was about 25 years ago. That is my friend Chrissy on the left, I think that is my friend Jane next to her (note to Janie if you are reading this, could you confirm this identification), the Good Lady Wife, and myself. I have carefully examined the rather strange raincoat I seem to be wearing and I must confess to only have a vague recollection of ever having owned such a garment. I wonder what happened to it? Hang on a minute : what is that lodged behind the exercise ball in my infamous back passage?
at July 11, 2012