Excavations 3 : A Love As Pure As A Single Malt 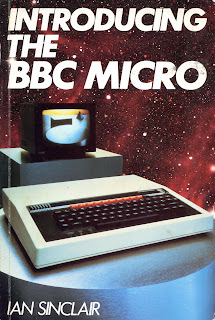 EXCAVATION UP MY BACK PASSAGE
A Summer series highlighting some of the discoveries made whilst de-cluttering the back passages of my house.

I know, it's cheating. As I reach into the recesses of my back passage I am carefully working my way around a host of cuddly toys and a heap of rotting VHS cassettes in search of books. But I like books. I can pick them up and flick through the fading pages : try doing that with a stuffed Winnie The Pooh or a cassette of Zulu.

My objet trouve for today is a book that was once very close to my heart. If you had asked me 28 years ago which book I would have taken to the proverbial desert island I would probably have answered Ian Sinclairs "Introducing The BBC Micro" I bought the book months before I bought the computer and with glorious anticipation I read it again and again whilst I tried to gather together enough money to buy the object of my desires. 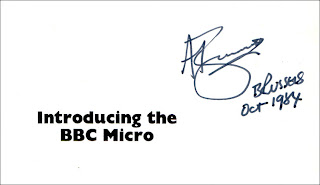 It dates from a time when I used to record the date and place of purchase of books on the title page (try doing that with a Kindle edition!) and therefore I can trace the immediate history of the purchase. It was 1984 : Isobel was still a medical student and I was trying to keep things going by working both as a lecturer in South Yorkshire and also moonlighting for the European Commission in Brussels. It was obviously during one of my regular trips to Brussels that I bought the book and it was with money I earned by working for the Commission that I bought the computer itself a few months later.

I loved that computer with a love as pure, and as brazen, as single malt whisky. I would work on it late into the night and dream of it when I eventually went to sleep. And as with so many old girlfriends - for sure, it was a girl - I wonder what ever became of it. I can't remember ever having got rid of it so perhaps it is waiting for me at the end of a rainbow; or, more likely, at the end of my back passage.
at July 19, 2012