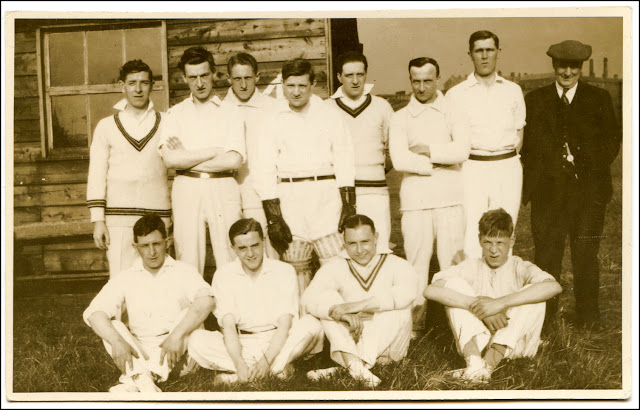 Our image prompt for Sepia Saturday 136 provides a composite illustration featuring both cricket and baseball. No doubt the chap who runs Sepia Saturday thought it would be a suitable image to mark the opening of the London Olympic Games despite the fact that neither of the games can be found in the modern Olympic programme. The prompt sent me off to the family photographic archives in search of something sporting but I eventually came to the reluctant conclusion that I am a couch potato descended from a long line of similar vegetables. The family name might just as well be Maris-Piper and my grandfather might just as well have been King Edward (and let me add before anyone else does that his wife should have been called Desiree).

After a lengthy (and enjoyable) search through the shoe boxes I eventually came up with the above photograph which features a gritty Yorkshire cricket team. My connection to it is the chap in the flat cap on the right - the team manager I assume - who is no other than my great Uncle Fowler. The very same man who collected all those old postcards, the man who was a bowling champion on the crown green, that same man was a cricket team manager. I will dig a little deeper and no doubt discover that he also was a long-stop (or whatever they are) on the baseball field as well. That's a fair amount of digging but it is the kind of exercise I like. Now why don't they make family history research an Olympic event?

Avert your gaze away from all the athletic exertions this weekend by taking a look at the SEPIA SATURDAY BLOG and following the links.
at July 27, 2012