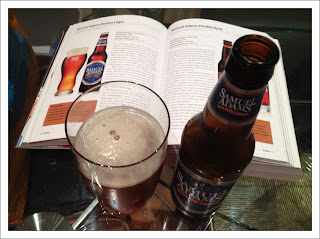 BEER ONE:
I am still working my way through my volume of "1001 Beers You Must Try Before You Die", which I see as a form of pilgrimage : the inebriates equivalent of a tour of religious shrines. My latest "station of the cross" was a delicious bottle of Samuel Adams Boston Lager which Tesco had kindly transported across the Atlantic for me. The tasting notes said something about a complex mix of "distinctly sweet malt and hop bitterness"; but I have never been particularly good at hunting out the supposed flavours to be found in a beer. All I can say is that when I had finished the bottle I wished I had bought two. You can't say more than that can you? 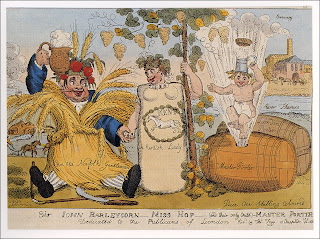 BEER TWO:
I spotted a book on brewery history on eBay the other day; one which was not already in my little library devoted to the history of breweries. I bid for and bought "An Uncommon Brewer - The Story of Whitbread 1742-1992" for a couple of pounds and I have enjoyed myself so far just flicking through and looking at the rich illustrations. This cartoon appears in the book and it illustrates the close relationship between agriculture (Sir John Barleycorn and Miss Hop) and brewing (and their only child, Master Porter). It has to be said that there are few finer ways of spending an evening than sipping a fine beer and flicking through an illustrated history of breweries. 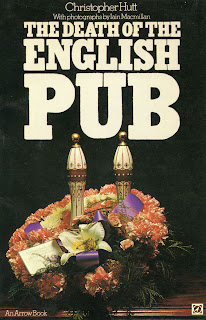 BEER THREE:
But what is this, I hear you ask : buying even more books when you are supposed to be de-cluttering! Feeling guilty about my purchase, I reached into my cluttered back passage with the intention of consigning at least one book to Cousin Dave's car boot sale to compensate for my new purchase. Alas, the first volume I managed to drag out was a 1973 copy of Christopher Hutt's classic "The Death Of The English Pub". It would be sacrilege indeed to get rid of such a volume and therefore I have hidden it away in my room just in case Isobel decides to strictly impose the "one in, one out" rule.

In one of the chapters, Hutt speaks about the decline of the hand-pulled pint in the days of the modern electric beer pump. His book was written 40 years ago and I am glad to say that what might then have appeared to be a terminal decline in the old hand-pulled beer engine has been reversed. I cannot resist ending with one of the little quotes that appear at the beginning of each of the chapters in the book. This one graces the chapter on "The Quality Of Beer":