On The Dole In Winchester 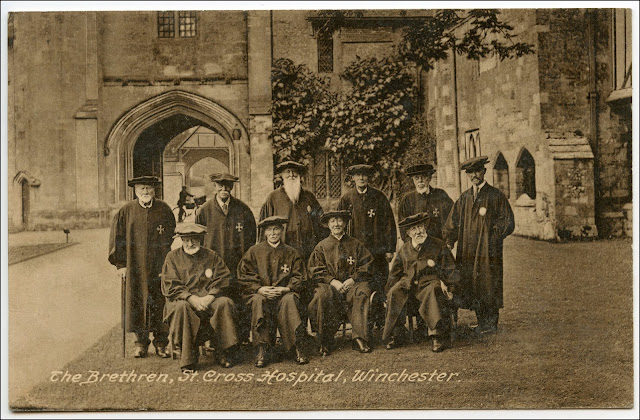 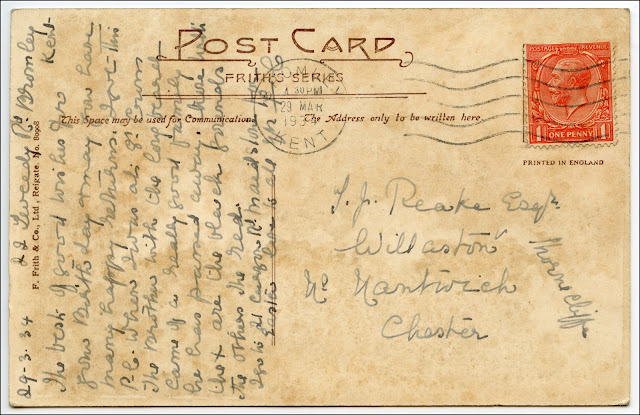 The best of good wishes for your birthday and may you have many happy returns. Love this P.C. When I was at St Cross. The Brother with the long beard came of a really good family. He has passed away. Those with the x are the black friends, the others the red. I go to 21 Curzon Road, Maidstone for Easter. Love to all. Yours F.C.
To : T.J. Peake Esq. Thornecliffe, Willaston, Nr Nantwich, Chester.


From Wikipedia : The Hospital of St Cross and Almshouse of Noble Poverty is a medieval almshouse in Winchester, Hampshire, England, founded between 1133 and 1136. It is the oldest charitable institution in the United Kingdom. The founder was Henry de Blois, Bishop of Winchester, grandson of William the Conqueror, half brother to King Stephen of England. Not only is it the oldest but is also the largest medieval almshouse in Britain; it is built on the scale of an Oxford or Cambridge college, but is older than any of the colleges at the universities. It has been described as "England's oldest and most perfect almshouse". Most of the buildings and grounds are open to the public at certain times. The Hospital still provides accommodation for a total of 25 elderly men known as "The Brothers" under the care of "The Master"; they belong to either of two charitable foundations. Those belonging to the Foundation of the Hospital of St Cross (founded in about 1132) wear black robes with a silver cross and trencher hats. Those belonging to the Order of Noble Poverty (founded in 1445) wear claret red robes and trencher hats. They are sometimes called the "Black Brothers" and the "Red Brothers". Brothers must be single, widowed or divorced, over 60 years of age and preference is given to those in most need.


I am not sure how I came to have this postcard, it is not one of Fowler Beanland's collection and dates from a time when fewer postcards were being used in Britain, and fewer still were being collected. There is, however, a certain charm about it and it led me to discover more about The Brethren of St Cross Hospital, Winchester. The Wikipedia entry goes on to say :


The Hospital continues an ancient tradition in the Wayfarer's Dole which consists of a small horn cup of ale and a piece of bread. The dole was started by a Cluniac monk and can be obtained by anyone who asks at the Porter's Lodge.


Now if ever I have come across an argument in favour of a trip to Winchester that is one. Amy can have the bread - it is that cup of ale that interests me.