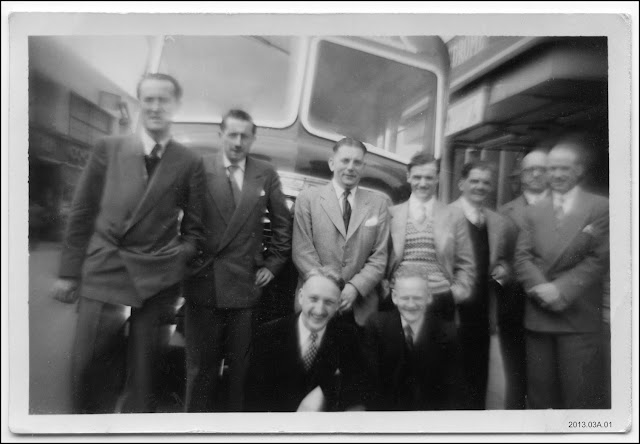 This photograph is like something that Claude Monet would have taken with a cheap camera : Box Brownie Impressionism. As with all such works we are wanting just a feel of the moment captured by the interplay of light and dark, detail and generality. It is a group of wrapping mechanics from the Halifax factory of toffee makers' John Mackintosh & Sons on a trip to Norwich to visit the firms' A.J. Caley chocolate manufacturing factory. This was no pleasure trip : they were there to see the wrapping machines and the cardboard box presses used in that arm of the business. The fact that the artist has just hinted that the coach may have been stopped outside the Norwich Hippodrome adds a thread of mystery and uncertainty to such a staid post-war study.

The photograph drips with memories. That is Terry Dickinson standing second from the left. I watched England win the World Cup in his front room in 1966. That is Ralph Steadman standing third from the right: my father and I would often call in at his house for a cup of tea as we went for weekend walks down the Shibden Valley. And that is my father in front on the right - with a smile on his face that measures the loss I still feel at his death.

Photographs don't need to be perfect as long as they can be tools for our memories and emotions.

Our Sepia Saturday theme image this week shows a woman working at a machine making paper boxes. My father spent most of his working life maintaining the machines that made boxes. And he used to have a Kodak Box Brownie camera which was the source of many of the old photographs I still have. You can visit other Sepia Saturday participating blogs and see what other people have done with the theme image by going to the SEPIA SATURDAY BLOG and following the various links.
at March 02, 2013