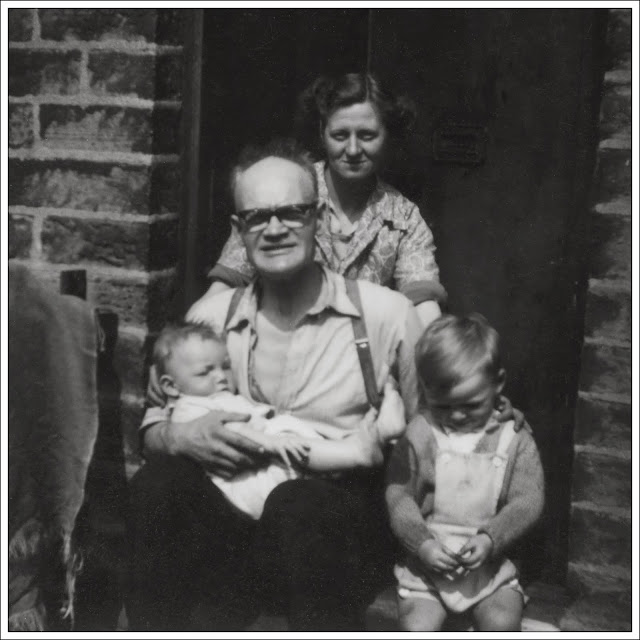 When Sepia Saturday started four years ago we didn't have themes: participants merely posted an old picture of their choice and said something about it. Over the years, the idea of weekly themes emerged, but the themes were not words or subjects, they were images. And if a picture is worth a thousand words, it can also give rise to a multiplicity of themes - and that, I believe, is what has kept Sepia Saturday going strong week after week, year after year.

Which brings me to braces. Or suspenders if you are a follower of American English. Our theme image this week shows the bandleader Stan Kenton plus a couple of band members all wearing braces. It was easy enough to find pictures of men wearing braces in my collection of family photographs : braces were the elastic scaffold from which most self-respecting northern working class men hung their clothes. And so I chose a picture of my Uncle John and Auntie Doris, sat on the doorstep of their Bradford terraced house with two children. I have no idea who the children are: they didn't have children so they must have been borrowed for the occasion. 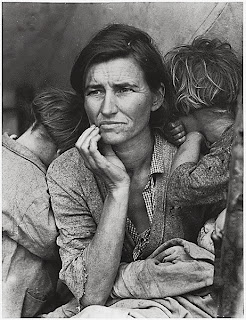 But when I examined the photograph, what struck me about it was not the children, nor was it the braces. It was something about the look on the face of Auntie Doris. There was a certain determination etched into her face and for some reason or another it reminded me of that most powerful photograph by Dorothea Lang of Florence Owens Thompson which is called "Migrant Mother". I suppose I could write a few paragraphs about the similarity of the images and a few more paragraphs about the photographer and the subject. But the connection defies words, it is a visual bond, as fleeting as a momentary glance.

You might look at the two photographs and see no connection, in which case that is fine. Images are not like sentences : you don't have to read them in the right order, you don't have to accept rules of punctuation. You can fly free, allowing you mind to be held up by nothing more than a pair of imaginary braces.

You can see how other people interpreted this weeks' theme image by going to the Sepia Saturday Blog and following the various links.
at August 31, 2013