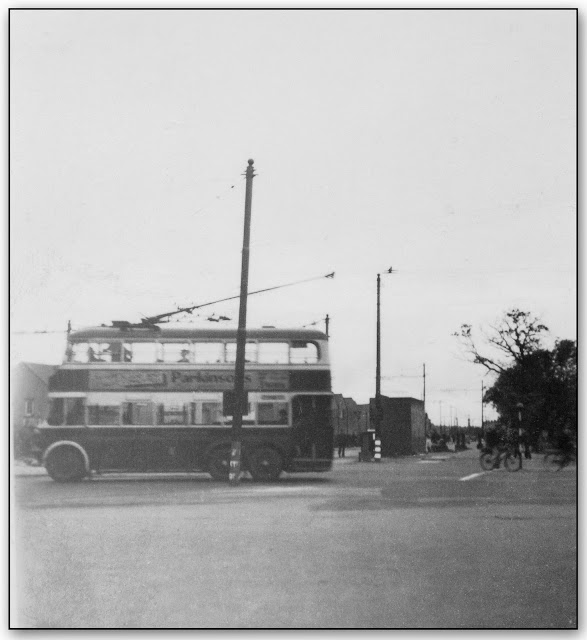 Uncle Frank was a clever chap. Not only did he amass an unrivalled collection of bus tickets, he also established a ground-breaking collection of audio recordings of early British commercial television adverts. These were kept on a series of reel-to-reel tape recordings housed in a wooden cabinet. Following his untimely death, Auntie Miriam - her who is so beloved by the world-wide Sepia Saturday movement - threw them in the bin as they were making the house look untidy. To add to his pantheon of achievements, I have recently discovered that he invented the geo-tagging of photographs. This was back in an age when digital photography meant taking pictures of your fingers by mistake; an age when Photoshop was a place you went to buy a 120 film. For all his genius, Frank Fieldhouse was somewhat remiss in filing his patent applications, otherwise the family would have made a fortune and I would have lived a life of luxury.

His technique of non-digital geo-tagging was rather clever in its simplicity. He pasted his photographs in an album and wrote underneath each one of them - with the kind of pencil you used to have to lick in order to bring it back to functioning life - the address where the photograph was taken. I can therefore tell you with a degree of geographic certainty, that the above photograph was taken on Osmaston Road, Derby in 1941.

Derby is not Liverpool, and a trolley bus is not a removal van, but nevertheless there are some vague similarities between my photograph and this week's Sepia Saturday theme photo. It is those lamp-posts and it is those cyclists who are about to peddle off the edge of the world. I suppose the date must have been about the same as well - a strange war-time scene where there seems to be too much roadway and not enough vehicles. 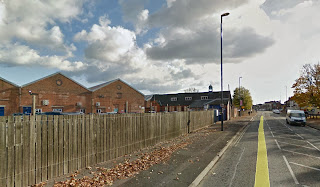 Of course, the question remains, "what was Uncle Frank doing in Derby in 1941?" I do know that during the war he worked in munitions : making bombs, or guns, or aeroplane engines. In 1941, it looks as though he might have been involved in the latter because Osmaston Road was the site of the Rolls Royce works where they made the Merlin engines which powered the legendary Spitfires of World War II. I doubt whether my Google Streetview screen-grab shows exactly the same spot as Frank's photo, but it is Osmaston Road. And there is still a lamp-post dissecting the earth. But the cyclist has long ago ridden off the edge of the world.

Go to the Sepia Saturday Blog and follow the links to see what everyone else is up to this week.
at December 15, 2013