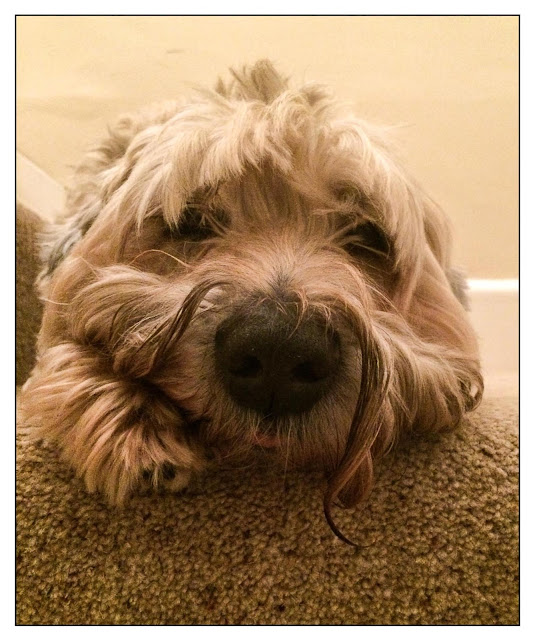 
I am sorry to have to tell you that Amy, our Soft Coated Wheaten Terrier, passed away last night. Although she has been slowing down over recent months, she didn't start being ill until the beginning of last week, when she suffered from the first of a series of what appear to have been internal bleeds. The Vets did various tests and she made a reasonable recovering before having a second episode last Friday night. Again she seemed to make a partial recovery but late last night she had a third episode, far worse than the other two, which left her in considerable distress. On the advice of the Vet she was put to sleep in the early hours of this morning.

It seems strange - and sad - to wake up without Amy. For the last thirteen and a half years she has been my daily companion. We have walked together daily and shared a whole range of thoughts, games and wonderful adventures. For many years Amy had her own Blog - Fat Dog To The Big Apple - in which we superimposed out daily walks around West Yorkshire onto a map of America and enjoyed a virtual walk up the California coast.

This morning, as I contemplated life without Amy, I re-read just one of those Blog Posts from back in 2007, and I decided to reprint it here. It covered Week 15 of our epic journey when we virtually walked from Bixby Bridge to Monterey. 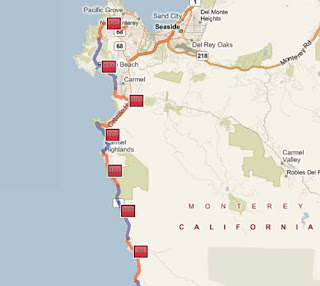 There seemed to be a spring in the step of Amy, my soft-coated wheaten terrier, as we embarked on week 15 of our epic journey. Perhaps she could smell civilisation: maybe the salt-encrusted aroma of chicken nuggets and fries was wafting south down the Big Sur coast. Perhaps she had detected another colony of elephant seals. But she was pulling on her leash as we left Bixby Bridge behind us and she provided a little extra motive force as we crept north past the coves, canyons and points in our journey towards Monterey.

We stopped for a late breakfast at the spectacular Rocky Point Restaurant where I was tempted by the Le Roc Corsaire’s Treasure (New York steak and two eggs any style served with country potatoes, black beans, sourdough toast, coffee and fresh orange juice. … all for $23.00) whilst Amy polished off a Buccaneer’s Bounty (Chicken/apple sausages or bacon, three eggs any style served with country potatoes, sourdough toast, coffee and fresh orange juice). I took the advice of the menu and started the day with a glass of champagne and then I started Amy’s day by downing another in her honour. When we set back on our way up Highway One, I was more grateful than ever for the constant pulling of my travelling companion which allowed me to doze and walk at the same time. We were still out in the open countryside – it has now been a good few weeks since we had passed through anything larger than a village (what the Americans call a city). This meant that every time you came across a building of any significance you were anxious to identify its purpose, its history and its secrets.

Thus, on our second day out, when we spotted a group of buildings marked MPSL – clinging to the strip of land between the road and the sea – we were anxious to find out more about them. Amy and I played guessing games. I suggested Missile Propulsion Strategy Laboratory. Amy went – I thought somewhat optimistically - with Meat, Poultry and Seafood Left-overs. In fact we were both wide of the mark, for this was the University of California Marine Pollution Studies Laboratory. Delving into the background of the Laboratory it turned out that Amy and I were not too far out with our guesses. The facility was first build as a missile tracking station by the US Navy, and later became a research base for the infant aquaculture industry. Now it monitors pollution levels in both sea water and fresh water : its local pollution-free sea and rivers providing an excellent control for research purposes. 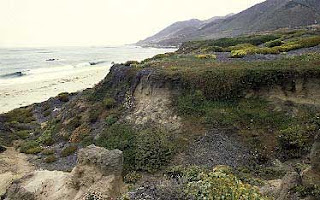 This feeling of being at one with nature was the theme of the first part of the week. Soon we entered the 3,000 acre Garrapata State Park where “spectacular rocky shorelines play counterpoint with an inland area of steep mountains and deep redwood canyons” The usual Warning Notices from Governor Schwarzenegger said that dogs weren’t allowed in the State Park - other than, in this case, on the road or on the beach – so we had to give the coniferous forests, the Californian Brome and the blue wild rye a rain-check. However, down on the beach we did see some brown pelicans – still quite rare in these parts – and a quite amazing plant which was – we were told - sea lettuce (Dudleya caespitosa).

A little further north we came upon Carmel Highlands and, feeling in need of a little luxury for a change, we were tickled pink to find the Tickle Pink Inn just off the main highway. The enchantment from the natural beauty, we are promised, “captivates your senses and sets a mood which will nurture, renew, and inspire”. The name comes from the fact that the site was originally the home of State Senator Edward and Mrs. Bess Tickle. A great lover of flowers, particularly pink varieties, Mrs. Tickle liked a suggestion to name their hillside stone cottage 'Tickle Pink'. The stone cottage has since disappeared but the name remains. Unfortunately, the Inn is another of those places where dogs are not welcome, so I had to smuggle Amy in in the usual fashion. Having a somewhat overweight long-haired terrier concealed under your pullover gives a whole new meaning to “tickled pink”. 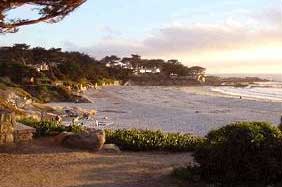 This discrimination against my travelling companion was maintained at our next stop on our journey northwards to Monterey – at Point Lobos State Reserve. Despite the fact that the name translates as Point Of The Sea Wolves, this is not a canine-friendly place and dogs are not allowed anywhere within the confines of the Reserve. So I apologised to Amy and walked on by. This "greatest meeting of land and water in the world" would have to wait for another visit. I feared that Amy might be getting a little upset by this constant rejection, but her spirits remained high, and she was still pulling enthusiastically. As we entered the wonderful city of Carmel-by-the-Sea, I at last understood why. Not only is this spot rated as one of the top ten destinations in the United States by Conde Nast Traveler, not only is it one of the favourite resorts of A List celebrities, not only has it become a Mecca for poets, artists and academics, …. it was recently voted the most dog-friendly city in America.

Wander the delightful streets and you are greeted with signs declaring “Dogs Welcome”. The city authorities produce long lists of all kinds of establishments where man and dog can enjoy life together, side by side in a spirit of harmony and equality. Dogs are allowed on the streets, in the parks on the beach and in the City Hall. There are dog-friendly restaurants, hotels, inns, and shops of all types. There are shops that specialise in clothes for dogs, food for dogs, furniture and fittings for dogs. Amy wandered around with a big smile on her blond furry face. She was in Carmel-by-the-Sea. She was in paradise.

It was hard dragging Amy away, but I wanted to get over the hill and in sight of Monterey before the end of our week. I eventually reached a compromise with her – our continued journey north in exchange for an all-expenses trip to the Diggidy Dog Boutique (it’s a kind of Harvey Nichols for Dogs). After looking around for what seemed like hours she finished up with some Earthbath Deodorizing Spritz ($9.95), a Wrought Iron Antique Rust Feeder Station ($78), and a Bow and Fur Leather Coat ($72).

As we walked north from Carmel and into the outer suburbs of Monterey, I reflected on the beauty of the California coast, the friendliness of its people and the delights that were yet to come. As for Amy, I am not sure what she reflected on. But she had a smile on her face and a batch of Carmel real estate brochures clutched tightly in her paw.

When I feel the sadness of not have Amy with me any more, when I miss her because she is no longer walking by the side of me, I will try to think of her in a little seafront condo in Carmel, happy and at peace with the world.
at May 28, 2015