Sepia Saturday 279 : Working With Boilers Is Not Money For Old Rope 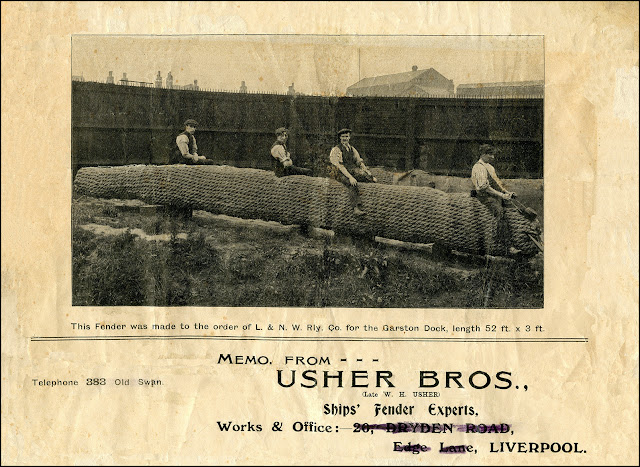 Our Sepia Saturday theme image this week features a somewhat gloomy looking industrial location with half a safety warning notice (who chooses these things, I mean what on earth are we supposed to do with that?). Whilst generation after generation of my extended family has worked in industry, the family photograph collection is somewhat short of snaps shot deep in the midst of factory, foundry or mill. Photographs were for more cheerful endeavours: trips to the country or the seaside, weddings and babies and - if the participants managed to survive their lives of hard work and industrial pollution - retirement parties. I do have a photograph of my father sat proudly alongside a machine he had just repaired and one of my mother in the mill : but both of these have been featured before. So I am turning to a few images that reflect heavy industry : only one of which is a family photograph. 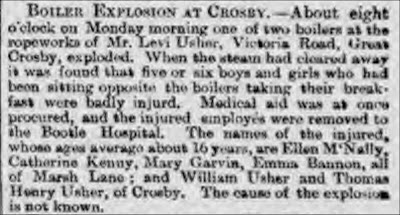 The family photograph is the one above which features on the printed Memo header from Usher Brothers of Liverpool. The Ushers were the family of my wife' mother and I think that the four men proudly resting on that monster of a ships' fender are Isobel's grandfather and three uncles. The entire family was involved in rope-making and fender making, so I may be mistaken with the exact identification, but that doesn't matter. The work itself was hard and dangerous: it certainly was not "money for old rope". This can be clearly seen from this extract from the Manchester Times of 22 March 1890 which describes a boiler explosion at the rope works of Levi Usher (Levi Usher was the uncle of the boys in the Usher Brothers photograph). The casualties of the explosion include two further members of the family : William Usher and Thomas Henry Usher. 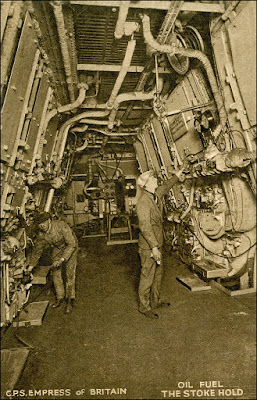 My final photograph neatly brings together the themes of ships and boilers as it is a photograph of the oil boilers on the 1930s liner, the Empress of Britain. The liner was owned by Canadian Pacific Steamships and, although there were three "Empress of Britain's" afloat during the 20th century, I suspect this is the 42,000 ton beauty that was launched in 1931. If I have made the correct identification, we can bring the story neatly back to danger, because that particular Empress came to a sad and sorry end in October 1940 whilst acting as a British troop carrier during World War II. She was attacked off the west coast of Ireland by German bombers and later sunk by German submarines.

Whether the danger comes from exploding boilers or from exploding bombs, the lives of our forebears were far from safe. The comparative peace and safety that we enjoy today was won by the hard work and sacrifice of those that went before us.

SEE WHAT ELSE IS HAPPENING IN THE WORLD OF OLD IMAGES FROM THE SAFETY OF YOUR ARMCHAIR BY GOING TO THE SEPIA SATURDAY BLOG AND FOLLOWING THE LINKS
at May 15, 2015