An Anodyne View Of A Stimulating Medicine

POINTERS TO THE PAST 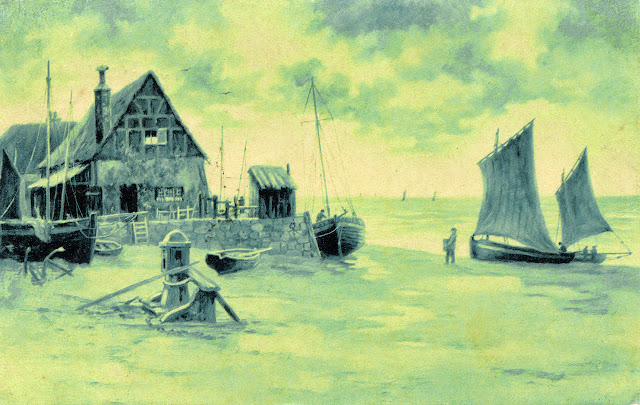 This is the kind of anodyne depiction of the British seaside that was ever-popular in cheap illustrated editions of the Collected Works of Charles Dickens and early twentieth century picture postcards. There always has to be a timber-framed house next to the sea and a fishing skiff pulled up on the sands. The colours are as limited as the artist's imagination and the entire effect makes you long for the era of the real photograph. But what goes around comes around and you can now probably get a Photoshop Filter that will transform your high resolution digital images back into this format. 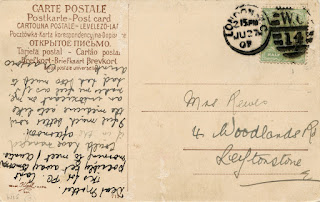 One of the great things about old postcards is that if one side fails to challenge the imagination, the other side may step up to the plate. The card dates back to July 1907 and was sent to Mrs Reeves at 4 Woodlands Road in Leytonstone, Essex. I don't seem to be able to find out much about Mrs Reeves, Woodlands Road still exists but Mrs Reeves seems to have passed through life without leaving too many markers. The message is written upside down - a practice not uncommon 100 years ago and no doubt intended to stop the postman reading the contents. 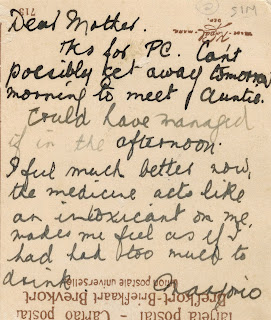 The message is hardly worth hiding from the postman although it manages to avoid being as bland as the picture. The sender might be Marjorie (who had trouble forming her "e's"), but we will let her off as she has not been too well recently. But the good news is that she is feeling much better thanks to whatever medicine she has been taking. It "acts like an intoxicant on me, makes me feel as if I had too much to drink".

Just in case Marjorie - or Marjerio - is still alive, all I want to say is that I will forgive you for the anodyne postcard if you send me a bottle of that medicine.