I am back from Wales, but I have a busy couple of weeks ahead of me and therefore I have no idea if I will get time to update this blog very often. We have a friend staying with us for the rest of this week and then on Sunday we fly off to Prague in the Czech Republic for most of next week. My reputation as a collector of pointless ephemera must be spreading for yesterday I was presented with a bag full of ancient books. I have a track record for never throwing a book away and therefore the arrival of several dusty volumes in the Odhams Home Library series sent the GLW into a cycle of despair.  Assuring her that my new acquisitions would be a priceless addition to our lives I was immediately able to turn to a volume entitled "The Home Entertainer" which was published in the 1930s. Here was an entire book devoted to the question of how to entertain house guests - what could be more appropriate with our guest arriving by tomorrow's slow train from London.


The book contains a chapter on games that can be played in the home for the entertainment of house guests. The following quote relates to a game entitled "The Mummy"


"There can be a great deal of fun in playing The Mummy, if it is well prepared. Every one is sent out of the room except the leader and one other. This one lies flat on the floor and the leader covers him with a sheet. His hands are stretched beyond his head, and on them he holds his shoes, uprights as though they were on his feet. These shoes must just protrude from the end of the sheet. With a little adjustment, and maybe the help of a cushion, the leader will be able to make the "mummy" look as though he is lying the other way round, and as though the shoes really contain his feet and his head is where his feet actually are. A "mummy" arranged in a suitably convincing manner is shown in Fig. 6 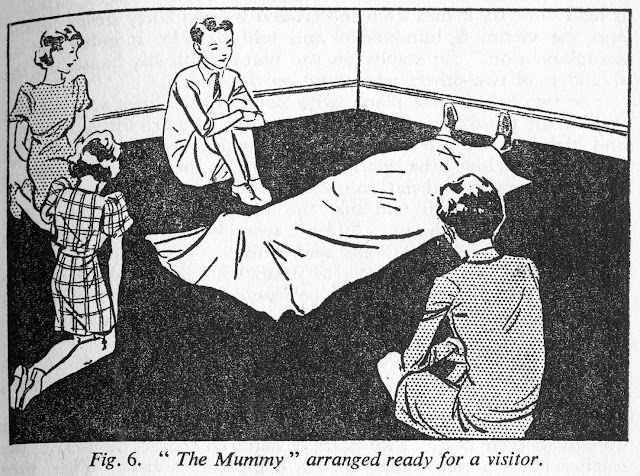 The leader then calls in the first victim, explaining in an awed voice that here is a mummy who is said to be able to answer any question addressed to it with proper respect. So the new-comer kneels down by the mummy, by what he supposes to be the head and proceeds to ask his question, say "Oh mummy can you hear me?"


"Surely!" replies the mummy - the voice, to the astonishment of the kneeling person, coming from near what he had assumed to be the feet. If the mummy, at the same time, sits up, from the "wrong end", the surprise is even more complete."

You must admit it sounds like a first class wheeze although I am not convinced that either the physical or psychological systems of a small house party with an average age well over 60 could take the stress of all that bending and surprising. Perhaps we will just play with The Lads X-Box instead.
at August 10, 2015