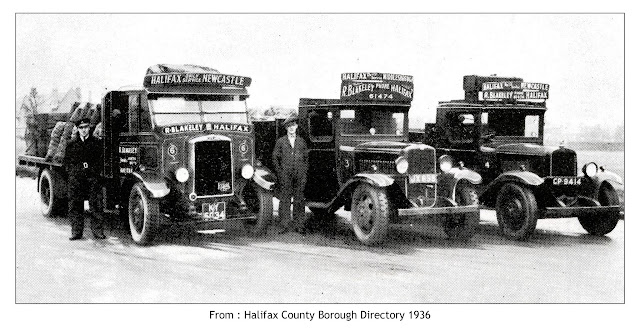 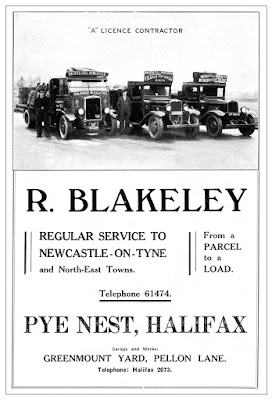 I was waiting for a delivery driver to bring a parcel yesterday and passing my time by looking through an old Directory (The Halifax County Borough Directory for 1936 to be precise). As so often is the case with such old publications, it is the adverts which are more fascinating than the editorial content (who, other than her offspring, would be interested in the fact that Minnie F Heckingbottom lived at 25 Helm Street?). In particular, my eye was caught by an advert from a firm of haulage contractors (R. Blakeley of Pye Nest) which was illustrated by a line of splendid old wagons.


They specialised in carrying goods - "from a parcel to a load" - between Halifax and the North-East. I had never thought too much about parcel deliveries back in those far off days, but it would appear that once you had worked out where you wanted your parcel to go you had to hunt around for a firm to take it there. The whole process must have been both complicated and a little hit or miss - as you watched the fine majolica vase you had packed so carefully set out on its journey to Auntie Winnie on the back of an open wagon, sharing space with a couple of hundredweight of nutty-slack.

As I waited for "your driver Brian" to deliver my parcel during a frightening precise time-window ("between 12.56 and 13.56") carried on reading my old Trade Directory and thought of how the Internet has changed the landscape within which we live. On the next page was an advert for another local firm - Arthur Dixon & Co Ltd - who prided themselves on being able to supply all forms of wire articles. 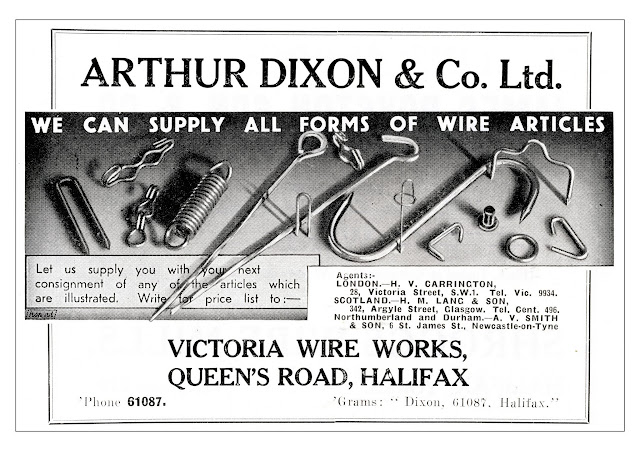 These days if I wanted some new tent pegs, I suppose I would turn to Amazon or eBay in order to source them rather than a local directory. I quickly checked on Amazon and discovered that I could get 20 heavy duty tent pegs for £4.45 and that included free delivery on one of the wagons of Mssrs. Blakeley. You can even buy a 10kg sack of coal from Amazon for £14.99 although I was intrigued to note that there was only one customer review which was "impossible to light".  I was just contemplating whether or not you could order a wire thingamajig to help you set fire to your nutty-slack when I was finally woken from my dream by the door bell. It was 13.09 and there was Brian, smiling, holding a parcel and asking me to digitally sign a receipt.
at September 10, 2015