A HISTORY OF MY FAMILY IN 100 IMAGES
2. Working Class Edwardian Respectability 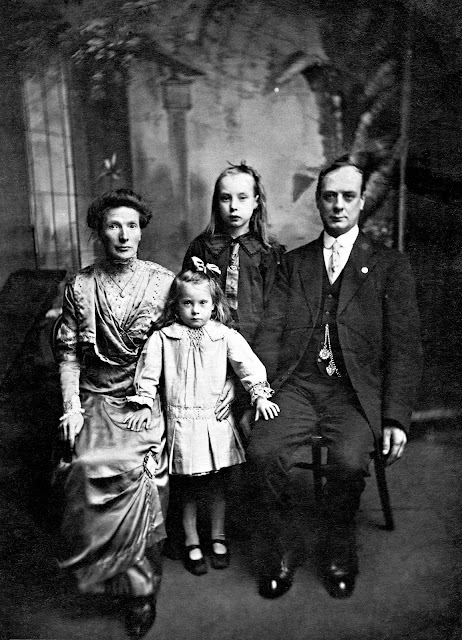 The second of my chosen images introduces the second of the four compass points that make up any family history, (and for the purposes of this exercise, my "family" is the extended family of both myself and my wife). We have already taken a first look at my fathers' immediate family, and now it is the turn of my mother's family, the Beanlands. And as our starting point we have a family photograph of almost the same vintage, dating, as it does, to either 1916 or perhaps 1917. It is a formal studio portrait which seems to portray the very nature of Edwardian prosperity and respectability : although Edward was long gone and the prosperity - if perhaps not the respectability - was merely a veneer. Despite their shining boots, gold watch chains and satin frocks, these were working class folk who were more familiar with the mills of West Yorkshire than they were with Edwardian tea parties. And as with many veneers, time has the habit of wearing away the surface to show what lies underneath. 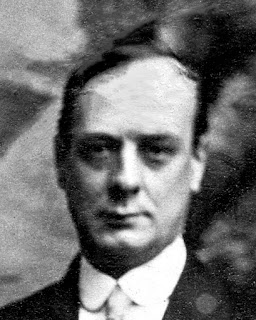 ALBERT BEANLAND (1875-1948)
At the time of the photograph, my grandfather, Albert Beanland, was in his early forties and living in the Princeville district of Bradford with his wife, Catherine, and two young daughters. By trade he was a mechanic who had experience working on all types of textile machines. He had not lived in Bradford for long, he had spent most of this first forty years living a few miles up the valley in Keighley, where his family had lived for several generations. Towards the end of the nineteenth century, Albert's father, Fowler Beanland, and his two brothers, Arthur and Fowler Jnr went into business on their own account as manufacturers of textile wringing machines in the Worth Valley near Keighley. They took a lease on Lower Holme Mill and in the 1901 census, Fowler Snr and Fowler Jnr are listed as "Spindle Manufacturer"s, Arthur is listed as a "Spindle and Flyer Manufacturer". How this fits together with the official description of the firm, Fowler Beanland & Sons, as "Wringing Machine Manufacturers" is unclear. That official description comes from the Receiving Order which was issued in 1904 when the company went bankrupt. That event will have had a powerful impact on the family and meant that Albert spent his life working for others rather than working for himself. He died, in Bradford, in September 1948, a couple of months after I was born. 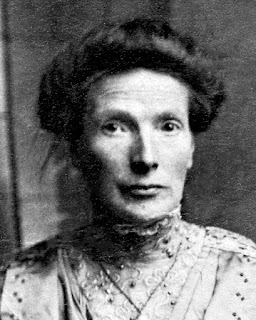 CATHERINE BEANLAND (1877-1960)
At the time of this photograph, my grandmother, Catherine - who was always known as Kate - will have been thirty none or forty years old. She had been married to Albert since April 1903 and had not had a job since her marriage, although before it she worked as a waitress in both coffee houses and pubs. And just like Albert's family bankruptcy must have had a powerful impact on the course of his life, Kate's early life was influenced by the death of her father, Albert, a grocer, when she was just fourteen years old. Although not yet forty at the time of this photograph she had lived in various parts of the country: she was born in Rutland, spent her childhood in Wales, and lived in Middlesborough and Leeds before eventually getting a job as a barmaid in Keighley. And it was there that she met Albert. Having moved to Bradford a few years before this photograph was taken, herb wandering life was at an end. She continued to live in the city until she died there in 1960, aged 83. 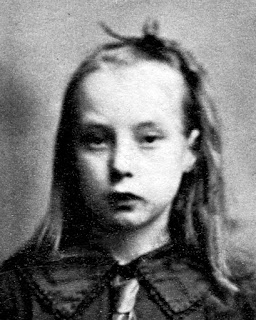 AMY BEANLAND (1904-2001)
Amy was Albert and Kate's first child and she would have been about twelve years old at the time of this photograph. Her story is a long and colourful one (and no doubt will feature in more detail in some of the other images that represent the history of my family. She was married three times - getting married for the last time when she was in her eighties - and lived well into her nineties, ending her life in a retirement home in Scarborough. 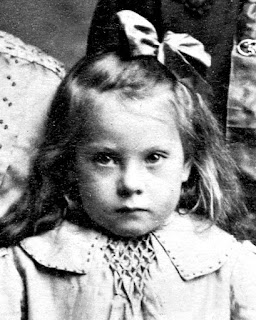 GLADYS BEANLAND (1911-2004)
The "baby" of the picture is, of course, my mother, Gladys. Although she had been born in Keighley, the family had moved to Bradford when she was very young, so it was that city she always looked on as "home". She was married - to my father, Albert - in 1936 and her new family eventually moved the few miles south to Halifax in the early 1950s.. Towards the end of her life she moved another few miles south to the West Yorkshire town of Brighouse, and it was there that she died in July 2004 - on her ninety-third birthday.
at October 03, 2016