A HISTORY OF MY FAMILY IN 100 IMAGES : Fending For Yourself In Liverpool 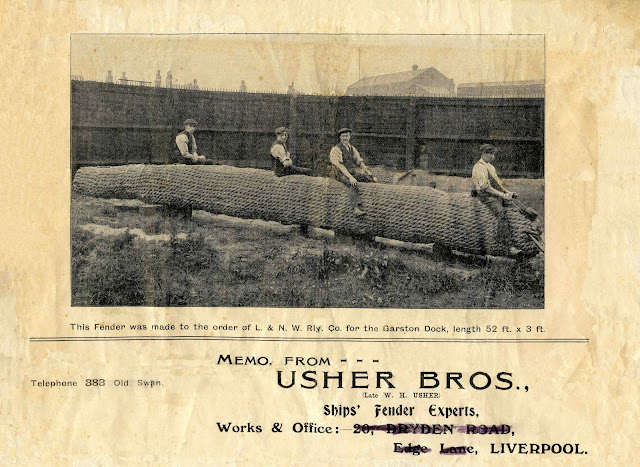 A HISTORY OF MY FAMILY IN 100 IMAGES
3. Fending For Yourself In Liverpool

For this third image we are switching from my immediate family to that of Isobel, my wife - specifically, her mothers' family, the Ushers of Liverpool. This is a partially repaired scan of an old memo sheet from what was the family firm - Usher Brothers, Ship's Fender Experts.

I cannot be entirely certain of either who features in the photograph or when it was taken: but I suspect that the older of the four men (second from the right) is Charles Frederick Usher, Isobel's maternal grandfather.

The date is likely to be either just before or just after the first World War. The memo has been amended to remove the Dryden Road address - and we know that the firm was still listed at that address in Gore's Directory of 1911. Such dates also fit in with the perceived age of the four men: if the photograph had been taken in, for example 1914, Charles Frederick Senior would have been 47, and the three boys would have been 22, 21 and 18.

The "W H Usher" of whom the firm is descended from is William Henry Usher (1846-1905), Charles Frederick's father. William Henry had been a rope-maker with connections to both this part of Liverpool and Great Crosby, a town a few miles north of the city. When his father, Henry Usher, died in 1888, the firm seems to have split between the Great Crosby side of the family and the Liverpool side, and later Charles Frederick appears to have shifted the firm into rope fender making as distinct from rope-making itself.

All this is a little unclear and - like any good seafaring rope - the story consists of numerous strands that have been woven together with a fair degree of uncertainty and then coated with a rich layer of the pitch tar of time. It may be possible - before I reach the end of my 100 images - to unravel the story a little.

Such skilfully woven rope fenders have long been replaced by generations of rubber and plastic devices which can stop ships crashing into docks. In a few weeks time I will be getting on a large ship and sailing south to find some sun. As we dock in some semi-tropical paradise, I will look down at the harbour walls and spare a thought for those ancestors sat astride their ship's fender in dark and drizzly Liverpool. .... Then I will go and have a pleasant drink in the bar and give thanks for being born when I was.