POSTCARDS FROM HOME : The Day The King Came To Town

The other day I bought a small collection old unused postcards dating back to October 1937 and commemorating the day the King and Queen visited Halifax. Just why they came to Halifax is unclear: it seems to be one ofd those occasional tours the royal family makes of distant parts of their empires, like Calgary, Christchurch and Cleckheaton. The King in question was George VI and he came with his wife, Elizabeth (who throughout most of my life I knew as "Queen Elizabeth, the Queen Mother") - the parents of the current Queen Elizabeth. They visited Shibden Hall, the splendid Elizabethan Hall - that is yet another Queen Elizabeth - I realise this is getting very confusing - that lies in the centre of Shibden Park, where they had lunch and then they had a civic reception at the town hall. It would appear that the photographs were taken by a staff photographer from the local Halifax Courier, and by a curious coincidence we are able to witness the event some eighty years later, thanks to a surviving film that is held by the Yorkshire Film Archives and available on the British Film Institute website. 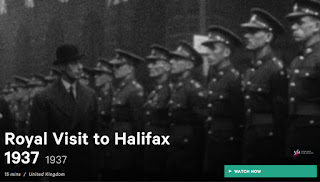 Watching the film is a bit like looking at a mirror which is reflected in another mirror. You can clearly see the photographer from the Courier taking the photographs that feature on these postcards - and you like to imagine that there was yet another photographer taking a photograph of the film-maker making a film of the photographer .... and so on into infinity. The two records - the film and the photographs - provide quite different interpretations of the day, and provide us with a fine example of the comparative values of both mediums in terms of preserving the past. Strangely enough, the film seems to be from a time much earlier than the photographs. Whilst the film contains far more raw information than the photographs - it is a bit like comparing a ton of topsoil with a handful of glass beads - both, in their own way, provide an opportunity to get under the skin of history. 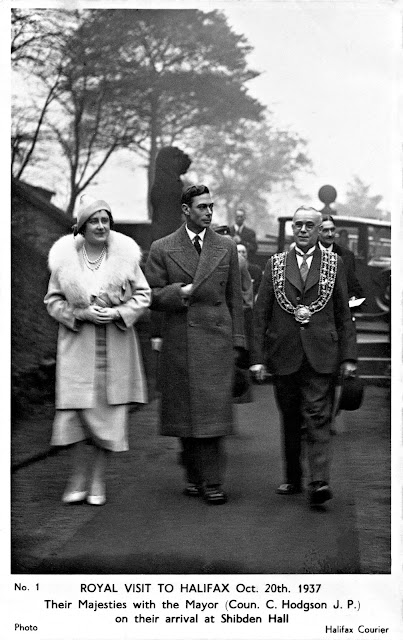 Photograph 1 : I would love to know what was behind the strange pose adopted by the King. Was his hand cold? Or was it a reaction to being forced to write right-handed, despite his natural left-handedness? 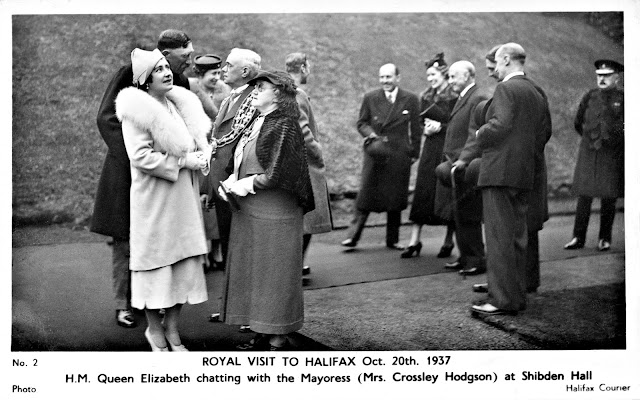 Photograph 2 : The Mayoress has such a delightful name - and by the look of it, a quite appropriate one as well. Why is she looking so cross? 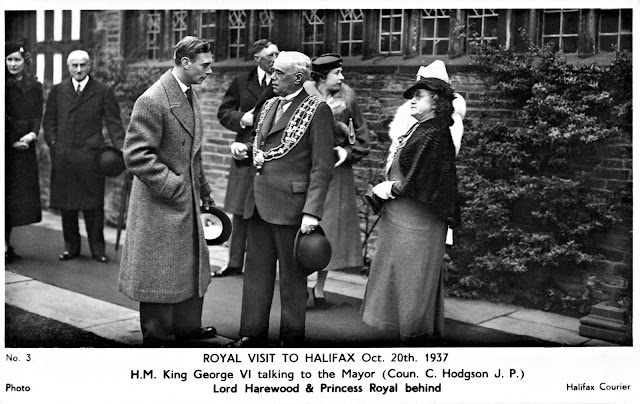 Photograph 3 : The King again, with his hidden right hand, again. One can almost imagine the conversation : "I say old chap, your wife has just bitten my hand!" 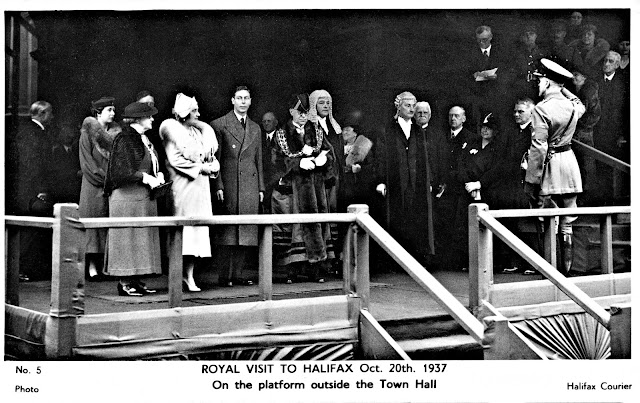 Photograph 5 : I have no idea what has happened to photograph 4 in the series. Perhaps that is the one that provides an explanation for the King's hidden hand and the cross expression on the face of the Lady Mayoress.