A Beeb, A Strad and A Spinosaurus 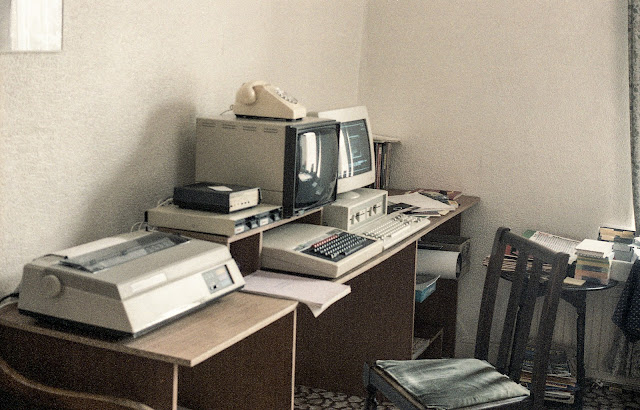 I have been watching a programme on TV about the methods archaeologists use in trying to date a site, and I have come to realise that it is a similar process to the one we use to try and date old photographs. This photograph of my room way back when provides a good example. Like all old photographs it is full of clues and it is just a matter of dating the individual elements and working towards an overall probable date.

At first I thought I recognised the room - and in particular the wallpaper - which gave me a date of somehow around 1983; as we moved from that house in the mid 1980s. The BBC Micro computer would fit in with that timeframe : I seem to remember acquiring one a couple of years after they were first introduced in 1981. But the rest of technology throws such an estimate into confusion, as that is an Amstrad PC1512 sat next to the BBC and they weren't introduced until 1986. And that is an early modem sat on top of the BBC's disk drives and such things weren't around until the latter part of the 1980s. These later technological finds shift the probable date to the late 1980s which shifts the location about two and a half miles further west than the original estimated location. Now all that remains is for me to somehow place the jaw-bone of the Spinosaurus clearly visible under the table into the likely timeframe.
at January 16, 2017