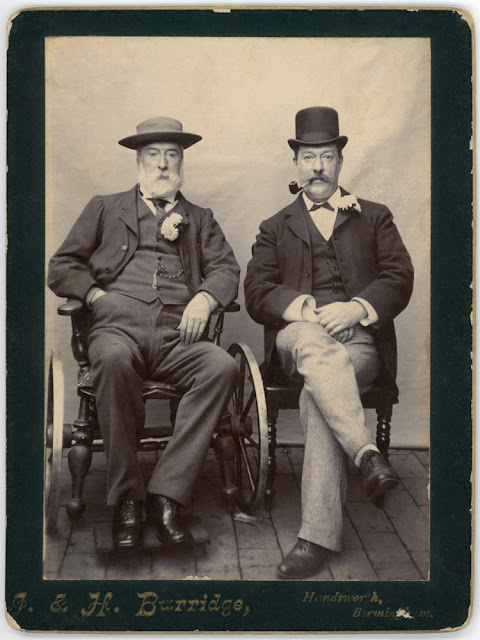 "There should be a name for it", a friend said yesterday as I was trying to explain to her what I found so fascinating about the scanning of old images. I had talked about how the process of digital scanning allows you to rediscover detail that has been hidden from view for decades, or even centuries. I had droned on about how it was like archeology, scraping away the surface to find history hidden beneath, and how it is often the most prosaic detail that sheds most light on the economic and social lives of previous generations. It doesn't matter who the people are, whether they are my great grandparents or someone else: it is the cut of their hats, the shape of their pipes or the nineteenth century design of a wheelchair, that - with the benefit of hindsight - is the most fascinating.  She listened to my explanation and then said, "there should be a name for it".

And she was quite right. For the last twenty-four hours I have been in search of that word. I started by checking to see if anyone had done all the hard work before me and come up with an acceptable term for this fascination with images as a vehicle for the delivery of insights into economic and social history. No snappy title had yet been coined as far as I could tell and the straight acronym (IVDIESH) seemed to have had all the charm sucked out of it. For a time I toyed with "Archeography" - which sounds good but falls short on etymological accuracy - and then moved on to "Archeoimagary" - which has already been stolen by those folk who study ancient paintings on rocks and cave walls (and you wouldn't want to annoy them by stealing their science). I quite like "Imagetory", and whilst there is already a #imagetory hashtag on Twitter, it only ever seems to have been used once.

All this searching for words to describe this nascent science is, in reality, an anathema to us imagetorians: the age of the word has been proved bankrupt - we are seeing the dawning of the age of the image. So ignore all I have just said and concentrate on excavating this fine late Victorian portrait from the Birmingham studios of J and H Burridge of two fine looking gentlemen.