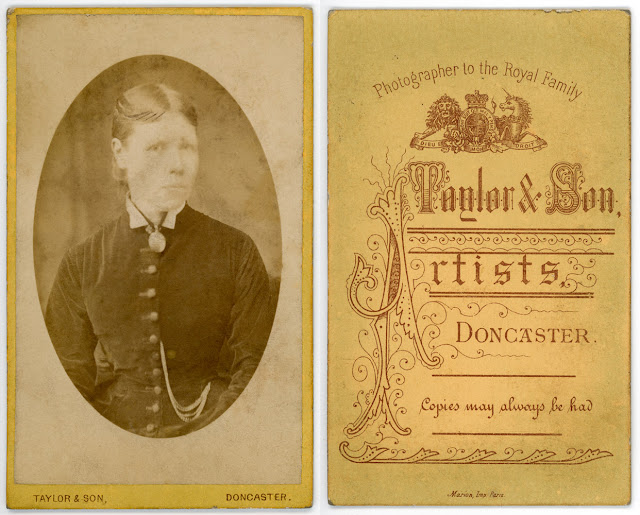 The world of Victorian photographic studios is full of Taylors. Taylors here, Taylors there, and in the 1880s and 1890s, Taylors every bloody where. The most notable Taylors was established by Andrew and George Taylor (A & G Taylor) in London in the 1860s, and within forty years it developed into the largest photographic studio chain in Britain, with branches in most large towns and cities. They also claimed to be "Photographers To The Queen", and later went on to establish branches in the United States. It is unclear whether this is the same firm as the one responsible for this carte de visite - Taylor & Son of Doncaster. It would appear that A&G did have a branch in Doncaster, but I can see no reason why they should use the different title there than anywhere else. "Photographer to the Royal Family" might seem to confirm the link between the two, but during the 1880s any Tom, Dick and Photographic Harry worth his salt claimed to have a Royal or aristocratic warrant of some sort or another.


What is needed, of course, is an authoritative directory of Victorian and Edwardian photographic studios. A Google search has not provided any clear advice on how to tell one Taylor from another, but I live in hope that someone has penned a definitive monologue on the subject.