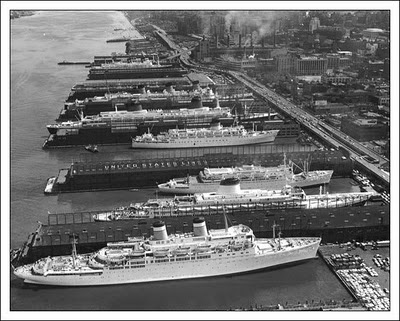 Those people who know me are aware that there are very few things in life I like better than potato chips. Alright, maybe a glass of decent beer, but even that is all the better when accompanied by a bag of chips. Moonlight I can take and, strangely enough, as I get older, I am becoming quite fond of motor trips of the kind my parents and their generation used to call "a run" : a rather pointless meander along country lanes.
Where on earth is the old fool going to, I can hear you all asking. Well the answer, as anyone who is familiar with the 1941 film "Babes on Broadway" will already know is "New York in June". The word came through this morning that we had managed to secure a place on next years' Arcadia cruise to the east coast of the USA, the high point of which will be two days in New York. In June. So I give fair notice to all my American friends : I will be wanting recommendations on what to see, where to find decent potato chips, and - particularly important - where to get a decent pint. I can't get the singing of Frank Sinatra out of my mind this morning, how about you?


From now onwards I suspect I am going to become a regular visitor to web sites specialising in New York history such as the Gotham Centre For New York City History. Maybe I will find some old sepia shots of the city, which reminds me that the Linky List for Sepia Saturday 21 is now up : sign up and join in.