A Familiar Face In A Foreign Land

Trawling through Napster's Just Added section is a curious business. It is a little like wandering through an airport far away from home. It is full of strange names in strange languages. Renaud Garcia-Fons rubs shoulders with Bernardo Sassetti as they walk past Kwaku Kwaakye Obeng. Occasionally you come accross a famous name or a face you recognise - isn't that Django Reinhardt over there and the guy he is talking to just looks like Duke Ellington. And then, just as you are feeling a little homesick and very far from the comforts of home, you see a familiar face - someone you never expected to meet in such strange surroundings. 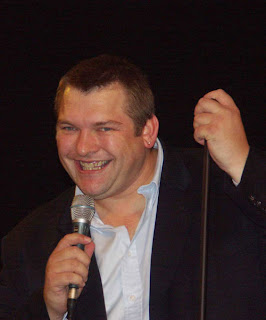 Yesterday, I discovered Paul Bentley's new CD - "Come Sunday" - on Napster. I first met and heard Paul some three years ago when we invited him to do the "Midnight at the Mechanics" session at the Marsden Jazz Festival. He went down so well, we have had him back every year since. He's class. But unless you live in the North of England you probably wouldn't know it. Well, that is until now. Thanks to Napster and other download sites, Paul can go global and that is just another reason why the new digital landscape is a more positive environment for performers than the old hierarchical commercial system.
So what of the CD.It is Paul's first album and it features Paul on vocals with Les Chisnall on piano and - on some tracks - Iain Dixon on clarinet. The choice of songs reflects both Paul's versatility as a singer and the range of his potential audience. There are a good few swinging standards there - the kind of material which has sold out his Marsden concerts over the years. The opening track "Let's Fall In Love" sets a high standard : a standard which is met by a number of other selections from "The Great American Songbook" such as "Paper Moon" and "Smile". One of the great discoveries of the CD however, is Paul's ability to take material which is slightly less familiar and make it resonant and memorable. My particular favourites are his treatment of that great Bill Evans number "Waltz For Debby" and his version of the James Taylor tune "You Can Close Your Eyes". The other discovery is his ability to deconstruct a song in a similar way to Kurt Elling (who has always been a particular favourite of mine). A sign of quality in a singer is that they are never afraid to slow things down. Just listed to his treatment of "My Foolish Heart" and "Body and Soul".

It is a lovely album which blends the familiar pleasures of a timeless voice with an ambition that allows it to occasionally stray from what might be safe and clichéd. But don't take my word for it. You can download samples from Paul's website or the whole thing if you are a subscriber to itunes or Napster.
at January 10, 2007