I returned to the Southern Californian city of Goleta today. It must be five years since I was here last and much has changed. Although it was in Goleta that I abandoned my attempt to cycle up the west coast of the United States, today's visit filled me with renewed enthusiasm for the project. All I need now is a bicycle. I feel the need to explain coming on.
Back in 2001 I found myself with a fat stomach, a desk-based job, an exercise bike and a new permanent internet connection. I hit on a routine of using the exercise bike each day, carefully calculating the distance I had "travelled" and plotting it on a map. I decided that I would undertake the first ever "virtual cycle tour" in history - from Los Angeles to Seattle. I would use the project to chart the ever-increasing availability of on-line information - so I could use the web to "see" what I would have been seeing if I had undertaken the journey in real life. I set out from Union Station in Los Angeles and for the first few days the task was relatively simple. There was an adequate supply of on-line maps, photos and information resources to feed my imagination. Within a week (or so) I had reached Santa Barbara and I was enjoying the experience so much I had mapped out the book tie-in and the film of the book.
And then I got to Goleta. Or rather I didn't get there. Back then, there was nothing available. No websites, no blogs, no image banks. Nothing. I tried alternative routes out of Santa Barbara, but unless I headed back to LA, it was pretty clear I was heading for a cyber wilderness. I abandoned the project. The exercise bike rusted up and I invested in some new clothes - a convenient couple of sizes bigger. 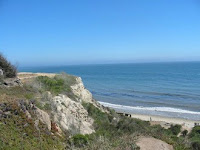 Whilst trying to write a piece on the new German Presidency of the European Union today, I had a sudden urge to do almost anything else other than complete the task in hand. So after a good few hands of solitaire I decided to take a return trip to Goleta to see what had been going on in the five years or so since I was last almost there. And what a change there has been. It's a city now (congratulations guys) and there exists enough information to keep even a nutcase like me happy for hours. I have even checked out the next few places on my route : Solvang, Lompoc, Santa Maria. They are all now website-rich. The problem is that I dumped the exercise bike years ago. eBay here I come.
at January 04, 2007