Newspaper Of The Week : Pravda

This is the first in what will be an occasional series which looks at some of the more interesting on-line world newspaper resources. And where better to start than with that paragon of heavy journalism - Pravda : a paragon which appears to have fallen on hard times. 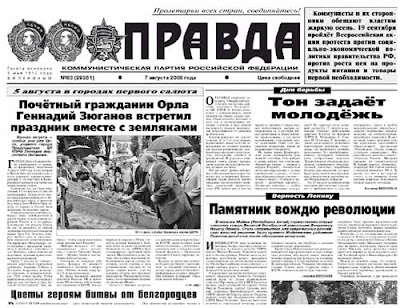 The Russian word "pravda" means "the truth" : and makes a suitably Orwellian title for what was the official organ of the Soviet Communist Party between 1912 and 1991. In August 1991, President Boris Yeltsin issued a decree shutting down the Communist Party and seizing all of its property. For a short period a number of ex-Pravda journalists continued to run the paper until the name and familiar Order of Lenin medals trademark were sold to a family of Greek entrepreneurs. There followed a series of splits and splinters which the original Russian Communist Party members would have been proud of, until the present time when Pravda exists in two quite separate manifestations.

First there is Pravda the traditional newspaper which continues as a voice of the Communist left in Russia. It looks not too dissimilar to what it looked like in the Soviet era (see the illustration above) and if you are desperate to read it, you can obtain a full digital copy via PressDisplay.com (but beware, at just four pages, it is an expensive buy) although you will need a decent knowledge of Russian as a translation is not available. 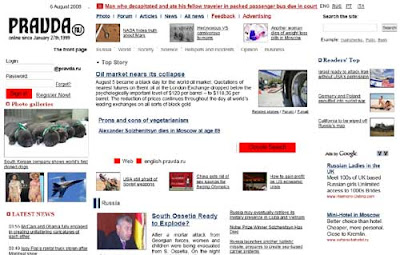 In stark contrast to the seriously heavy Pravda newspaper there is Pravda online (Pravda.ru) which is a very different kettle of fish. With a content and style which makes an English tabloid look staid and restrained, Pravda.ru is the face of modern, brash, cheap and cheerful Russia. Today's headlines included such gems as "Man who decapitated and ate his fellow traveler in packed passenger bus due in court" and "Nude blond visits petrol station creating public disturbance (PHOTOS)" (their upper case emphasis, not mine). Lenin would have blushed, but you might want to pay it a visit.