More up to date 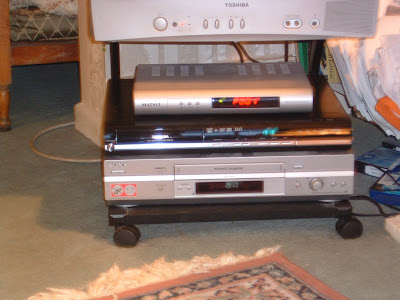 Loathe though I am to follow AB's fascinating forays with trivia, nevertheless I thought the world should know we have just joined the modern world a bit - the thin black line (well, box) in the photo above.

In the way all such momentous decisions are made, last Sunday we realised we had used up all our spare VHS tape because I insisted on taping Harry Potter (which clashed with Time Team) and then we wanted to tape Lewis (just watched it - so well done in the spirit of Morse) so we could watch The Lady's Detective Agency (brilliant show catches the spirit of the original books so well) ... and then Damages (plot still impossible to follow) - thanks to the fates, the programmes we like to watch seem to turn up like London buses on Sunday evening at the moment.

But JG-C was due out to her 'small' choir Monday evening so we needed to record Crime Watch for her... and no clean tape left. Off we went on Monday morning to... er... buy some more tape. Except we'd long wondered about getting a DVD recorder, so we 'just had a look' in Curry's and... bought the box above. Where the fact it is a DVD recorder/player is almost irrelevant for us since we scarcely ever borrow (let alone buy) a pre-recorded DVD, nor do we tend to want to keep recordings long or archive them - no, no what the box does have which is absolute bliss is, firstly, an HDD (Hard Disc) recorder and, secondly, a digital tuner.

To deal with the second first, we increasingly find that programmes we want to watch (e.g. way-out zany Earl) - and therefore often need to record - are on digital (freeview) channels... previously only recordable by setting the digi-box (on the top in the photo above) for the VHS recorder (at the bottom in the photo) ... to record-from.... a process for not-quite-clear reasons by no means fail-safe and besides (the cheapo TV, just showing top of the photo, is old and only analogue) we couldn't watch a digital channel if we wanted to be recording a different one. So, to be able to record digital channel whilst possibly watching a different digital channel is good. And, shortly, analogue is going to switch off, anyway!

As for the former, the HDD not only easily can hold absurdly far more hours of recording than we'd ever want but has this godsend facility that you can watch from the start whilst the thing is still recording - thus JG-C could come in on Monday at about 9.20 and watch Crime Watch from the start whilst the programme was 20 minutes ahead of her. BUT, she could thereby be back to 'live' for the update.... and there's not much point watching a "live update" if in fact it's a recording(!)

Equally, now if somebody calls around (or telephones) when we are watching something and it's rude or inconvenient not to pay attention to them we can for a mere two flicks of the button start the HDD recording.... and go back to our programme easily after the interruption, watching without having to wait, merely watching five or ten minutes behind the actual transmission. This is SUCH a convenient practical facility...

Mind you, there is one snag with this ... fairly trivial but, then, 'trivial' is everything, I find. The new box takes about 30 seconds to get organised after switching on so you can't, actually, "just" hit the button unless you've neurotically set things with the recorder ready to go in case somebody calls. Nevertheless, what you can do once it's on is just so superb. Definitely a good buy. But for being able to do just exactly what you might pragmatically need... I find it funny it can do a million things we DON'T need which sound so glamerous... what's good is that it can do what we do need.

It is not often that you find yourself with a picture of a crime in progress, but this particular scan from my old negatives must be one... 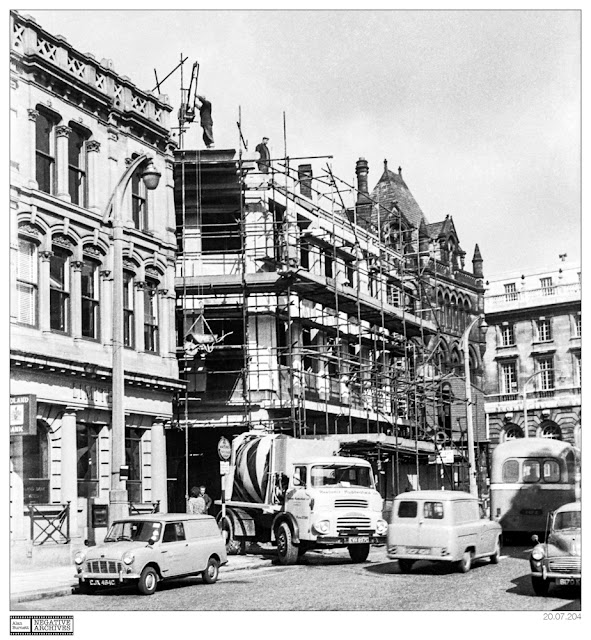