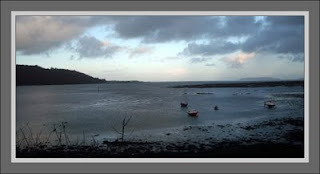 And so we went to Wales. We headed along the North Wales coast road to the City of Bangor which is about a two and a half hour drive away from where we live in Yorkshire. Bangor stands proud keeping watch over the Menai Straights and the island of Anglesey in the north-west corner of Wales. It is an ancient city and home to a thriving university. It is also home to a thriving branch our family. It was wonderful to meet up once again with so many members of our extended family and they welcomed us with a warmth and a generosity which the Principality is famous for. The scenery was beautiful and, it itself, could justify the "Paradise Found" part of the title of this post, Amy and I explored many a byway and footpath around the city and Amy discovered the delights of chasing seagulls. 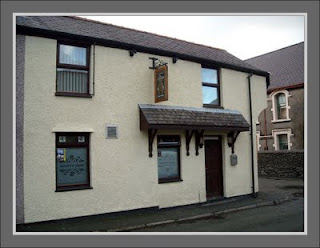 But the true "Paradise Found" was the Mostyn Arms, the gorgeous pub owned and run by two generations of the family. I have always been one to claim some kind of genealogical connection to a half-decent pub (I once spent a delightful drunken afternoon in the Albert Hotel in Keighley for no other reason than my grandmother might just have been a barmaid there some one hundred years earlier), However, anyone who loves a traditional British pub and fine ale would be proud to claim a connection to the Mostyn Arms. On Monday evening I sat in the comfortable bar whilst relatives brought me pint after pint of real ale to sample. I may be biased but I do declare that if any of you ever travel within one hundred miles of Bangor in North Wales and fail to beat a path to the Mostyn Arms, you are - in the words of the great Dr Johnson - a fool and a rogue. I have a vague memory that after the Mostyn Arms I was taken to the Skerries (a second pub run by the family) but I was too drunk to appreciate it and therefore I need to plan a return trip to Wales as a matter of urgency. 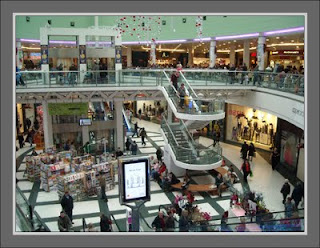 And paradise was lost today when, on the last day of the Good Lady Wife's short holiday, I was condemned to the seventh level of inferno, otherwise known as the White Rose Shopping Centre in Leeds. Whilst the GLW trudged around yet another store I excused myself and said I wanted to take a few photographs. Having just taken the above shot I was approached by a very official security guard who informed me that it was illegal to take photographs of the shopping centre. "Why?", asked I, reasonably enough. "To prevent terrorism", said he, "we wouldn't want potential terrorists to gain information about the lay-out of the centre". I tried to point out that the Centre itself publishes and gives away a handy little guide complete with maps and photographs, but it was not his day for logic and he walked away. There was an old Yorkshire chap who had been stood near to me and who had overheard the conversation. He came up to me afterwards. "T'worlds gone daft", he said. I nodded. "Paradise has been lost again", I replied.
YOU MIGHT ALSO LIKE TO LOOK AT:
THE MOSTYN ARMS, BANGOR : Take a look at the Mostyn Arms website and see what you are missing.
ALAN BURNETT'S DAILY PHOTO BLOG : I will publish a selection of the photographs I took whilst in North Wales over the next few days on my Daily Photo Blog.
at November 18, 2009