The Surreal Sunday Challenge - The Result

I suppose if the surrealists had been running the Surreal Sunday Challenge then all of the six pictures would have been genuine, or alternatively, they all would have been fakes. However,  I am no surrealist and therefore I stuck to the rules. So here are the results of the challenge. 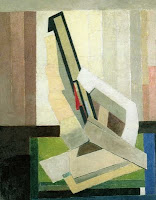 Picture No. 1 is by the British artist Lawrence Atkinson (1873-1931) and was part of the "British Surrealism in Context" Exhibition. Atkinson was originally influenced by Matisse and the Fauves and specialised in landscapes. However after he was introduced to Wyndham Lewis his style changed to the style represented by this picture. GENUINE.

Picture No 2 is by the artist Reuben Mednikoff (1906-1972) who worked throughout the thirties and forties with Grace Pailthorpe. They were very interested in the theories of Sigmund Freud and experimented in painting styles which brought repressed memories to the surface. In the 1940s they were both expelled from the British Surrealist Group as their views on the scientific analysis of art went against the views of other group members. GENUINE. 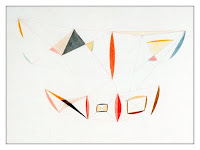 Picture No 3 is by Arthur Jackson Hepworth (1911-2003) a cousin of the sculptor Dame Barbara Hepworth. He was a leading member of the British modernist movement and maintained a detailed photographic record of the work of many of his more famous fellow artists. GENUINE. 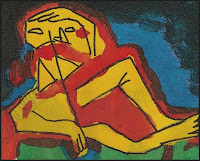 Picture No 4 is by Alan Burnett (1948-2057), an untrained artist who would happily admit to anyone who would buy him a pint of real ale that he had the artistic talent of an elephant fly. He would often go to exhibitions of modern art and say things like "Good grief, I could have painted that on the kitchen table" `until one day he tried it and found out that it was a lot more difficult than he thought. FAKE. 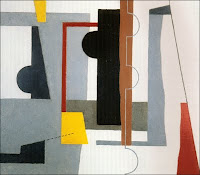 Picture No 5 is by John Piper (1903-1992) who is perhaps best known for his picturesque, architectural and landscape paintings but who also produced dramatic abstract works. In the 1950s he branched out, creating designs for stained glass, pottery, textiles and stage sets. GENUINE.

Picture No 6 is by the British artist Patrick Heron (1920-1999) who after studying at the Slade School worked as an assistant to the potter Bernard Leach in St Ives. Later in life he worked as a teacher and as art critic for the New Statesman. GENUINE.

The vast majority of people voted for No 3 (my apologies to the late Arthur Jackson Hepworth) and nobody voted for either No 1 or No 5. My congratulations go to the one person (Jenny Freckles) who got the answer right and also to AngelMay who came very close indeed. It has been an interesting experiment which has left me with a greater admiration for artists who work in styles that I may not immediately like or appreciate. I found my fake very difficult to produce and I will not be saying things like "I could do something like that" again in a hurry.
at November 02, 2009