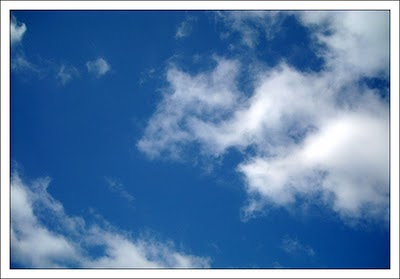 There are two things missing from the photograph of the morning sky I have just taken from my garden. The first is the familiar trails of airplanes criss-crossing the sky (as we are located just south of Leeds/Bradford International and just east of Manchester International the sky normally resembles a doodling pad). The reason is that practically all planes in Northern Europe have been grounded for the last 24 hours and look likely to remain grounded for the next 24.
The terrorist responsible for this disruption in world transport is a volcano in the Eyjafjallajoekull area of Iceland which is spewing out volcanic ash which can turn modern jet engines into useless pieces of scrap metal. The second thing missing from the photograph is any sign of the ash itself, although we are assured that it is up there waiting to strike the first 747 that dares to take it on. It is all very strange, like the beginning of a science fiction book. Indeed, both the Good Lady Wife and I were so reminded of the opening of John Wyndam's "Day Of The Triffids" last night that when The Lad invited us out to view the sunset, we both refused.
If we still exist as a species tomorrow I will be back with a Sepia Saturday post. In the meantime thank you for your feedback about blog load-speeds : the problem seems to be limited to Internet Explorer which many people shun anyway. I will try a few experiments to see if I can improve things : time for a little blue sky thinking.
at April 16, 2010