Flowers Flowers, Give Me Your Reaction 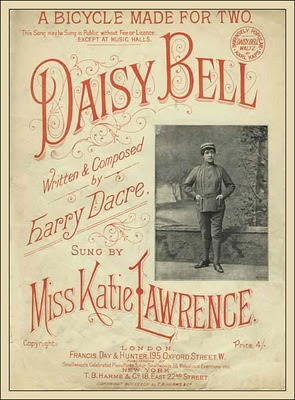 Since yesterdays' post I have had difficulty getting the tune Daisy (or to give it it's proper title Daisy Bell) out of my mind. Catchy as the tune is, there is a limited number of times those lyrics can circulate around the ring-road of your mind without beginning to sound a little tired.
"Daisy Daisy,
Give me your answer do!
I'm half crazy,
All for the love of you!
It won't be a stylish marriage,
I can't afford a carriage,
But you'll look sweet on the seat
Of a bicycle built for two !"


Some years ago I invented a silly game to play with popular song lyrics. Those who have hung on my every word for the last four years will remember the August 2007 post "This I Have Done My Route" which was my adaptation of the lyrics to My Way. So yesterday I decided to take the same approach to Daisy Bell. I took the original English lyrics by Harry Dacre, fed them into a machine translation programme and translated them into Norwegian. I then took the resulting Norwegian words and machine translated them into Serbian, and then the Serbian words were subsequently translated into Icelandic. I then switched translating machines from World Lingo to Google Translator, just to add a little extra spice. The Icelandic was translated into Dutch, and finally the Dutch was translated back into English. The resulting song - "Flowers, flowers" - is quite pleasing and I will ask you all to get Friday off to a jolly start by joining me in singing a rousing chorus. All together now :
Flowers flowers
give me your reaction.
I'm half crazy,
love you all!
It will not be a modern marriage,
not hired and carts,
but you see a nice place
bicycle built for two!