Sepia Saturday 20 : Son Of A Bathroom 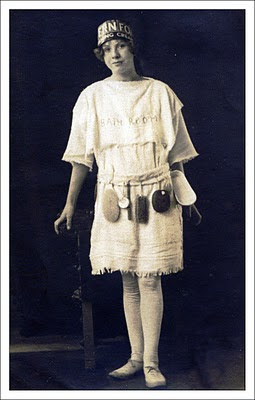 Son of a gun I may not be, but if this photograph of my mother is anything to go by, it would seem that I am the son of a bathroom! I remember my mother telling me a little of the background to this photograph which must have been taken in the early 1930s : a fancy dress party to which she went dressed as a bathroom. But who would dream of going to a fancy dress party dressed as a bathroom? Certainly not the sensible woman who gave birth to me a decade later. Perhaps it merely emphasises the point that if you want to journey into the unknown all you need to do is to investigate your own heritage. But I like the slightly eccentric inventiveness which created the dress and I admire the audacity which translated a silly idea into what I am sure was an award-winning project. Son of a gun I may not be, but wouldn't it be nice if the slightly eccentric chap who dreamed of taking his dog on a virtual tour of America was the son of a bathroom.