Postcards From The Pond 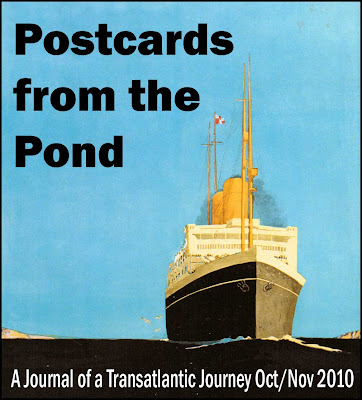 After almost a week of frantic packing I seem to be no closer to being ready to embark on my holiday. But on Friday, whether the bags are perfectly packed or not, we set out : first to Southampton to join our ship and then across the wide Atlantic to the Caribbean Sea. In total it will take us nine days to cross (although there will be a one day stop in Tenerife in the Canary Islands) and I have given considerable thought as to how to occupy myself during those long days at sea when there is nothing to do but sip a cold beer and watch the sea from our cabin balcony. When we were last on holiday in January I managed to get the first chapter of the GNTFC (the Great Novella of the Twenty First Century) written and during the last couple of weeks I have managed to return to that, tear it up, start again and get the first draft of the re-written first chapter completed. If all goes according to plan I hope to get at least another chapter finished by the time we reach the Caribbean Sea. As the story is set on a liner crossing the Atlantic to New York in 1934, it would seem like a suitable way of occupying those long balmy days at sea..
But hopefully I will not be ignoring my blog altogether and I plan to send a series of "postcards" from the journey across the "pond". Whether or not I will be able to publish these on a regular basis will depend on the strength of the satellite signal, but if necessary I will group them together and send them when there is a functioning Internet connection. Please don't worry about leaving comments on these posts : the cost of using the service from on board ship is high and therefore I will not be able to reply to comments or return visits during the next couple of weeks. Just think of these posts as "postcards to friends", which is exactly what they are.
Our home during the next two and a half weeks will be the P&O cruise ship Ventura. We first went on the Ventura a couple of years ago just after it was launched. At the time I put together a comparative picture of the new ship in order to give people an impression of its size. For the sake of comparison (and with the help of a little cut and paste technology) I showed the Ventura to scale sailing alongside the Titanic. That comparison didn't bring me any bad luck on that occasion, so I will use it again now. 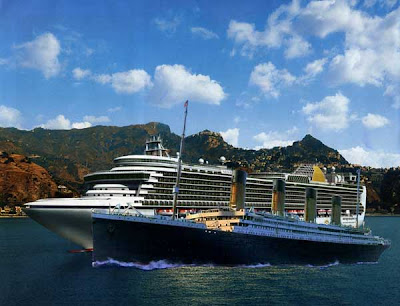