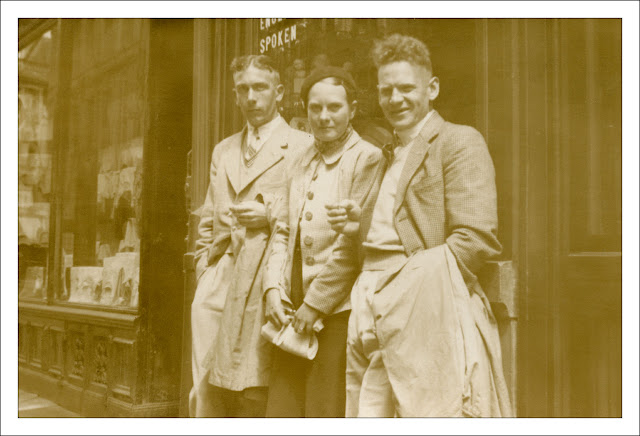 Our Sepia Saturday archive image prompt this week features the interior of a busy Australian grocery store in 1944. For a family which comes from a so-called "nation of shopkeepers", shopkeepers are notable by their absence in my ancestral line, and it is to the outside of a shop that I have to go to find a suitable old photograph for Sepia Saturday 143.

It is a photograph of my father (right), mother, and a friend of theirs called Charlie Pitts, and it must have been taken in the mid 1930s. The sign in the window clearly says "English Spoken" and the photograph was taken during a day-trip to Calais in France. I remember my father telling me about the trip many years later. Until we went on a camping holiday to France in the early 1960s, it was the one and only time he had been out of the country. My parents and "Uncle Charlie" would often holiday together on their motorbikes and they have been featured before on my Sepia Saturday submissions. Although my photograph predates the Australian photograph by some ten years, you get the impression that, were you to enter through those sepia doors, there would be the same arrangement of stacked shelves and busy industry. 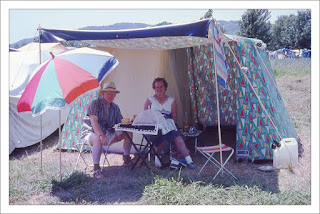 Move on 30 or so years and the faded sepia gives way to the washed-out colours of a 1960s colour transparency.  This is a photograph taken on that second trip to France and it shows Albert and Gladys sheltering from the sun in their tent on a camp-site at Juan Les Pins in the South of France. I was about 14 at the time and the holiday was a great adventure. After driving through France and sitting in the sun for a couple of days, my poor father had to take to his bed with sunstroke. My mother spent her days, trying to keep insects off the sandwiches and searching for shops with signs saying "English Spoken"