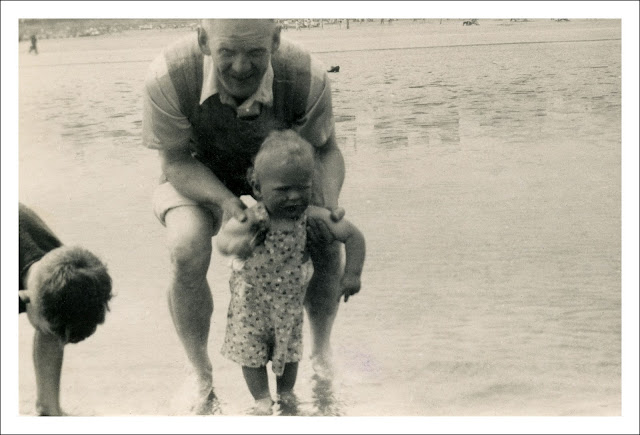 Well thank goodness International Madness Week is behind us for another year and we can concentrate on order, logic and rationality. And what could be more ordered and logical than this charming child paddling in the sea in some northern sea-side resort, proudly supported by his father whilst a renegade sibling tries to get in on the act. Yes, that is me in that pretty patterned bathing suit.

The theme image for Sepia Saturday 144 features a headless body and provides a perfect example of frames of view joining battle with ordered presentation and coming up with something that has an attraction of its own. If my mother (for it must have been her that wielded the family camera in this 1950 photograph) had been more careful, my brother wouldn't have been decapitated nor my father scalped. If she had planned the shot more carefully, the horizon might not have dipped so precariously and there wouldn't have been such an expanse of North Sea dominating the view. But then the photograph would have been ordinary. It might have made a statement but it wouldn't have asked any questions. And that, would have been boring.

You can fight boredom this weekend by visiting the Sepia Saturday Blog and following the links to convicts, headless bodies and all manner of strange and wonderful images.
at September 22, 2012