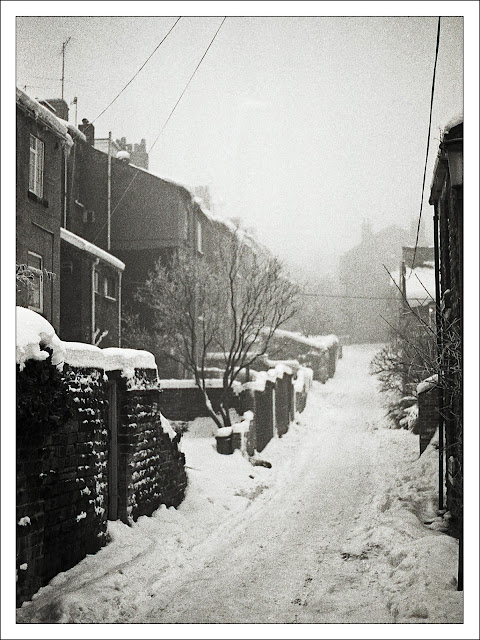 Searching for old family photographs to fit in with the theme for Sepia Saturday 163 and finding precious few snowy scenes, I found myself wondering whether it was really true that back in the golden age of my youth, the sun always shone and snow was confined to the magic of Christmas Day. And then I heard the voice of my mother, echoing down the decades, shouting "Don't you be taking that expensive camera outside in this weather and getting it all wet!". Photographs were for the summer holidays and smiling family groups slung on deckchairs. Photographs were for weddings when the generations of old would posed in their moth-balled finery. Photographs were for young lovers, arm in arm, looking into each others' eyes and seeing their future. Winter was an inconvenience, a challenge and a trial to be endured but seldom photographed. I have had to move forward to the 1960s before snow-bound photographs emerge from my collection : an age when I could over-rule my mothers' objections and rashly spend my pocket-money buying film to waste on "mucky back-streets and thick cold snow."

As usual, you can see how everyone else has approached the theme image for Sepia Saturday 163 by going to the Sepia Saturday Blog and following the various links.

This Sepia Saturday post forms part of my experimental News From Nowhere Weekly. Other stories in this issue include :
* STRICTLY SUSTAINABLE : Introducing News From Nowhere Weekly.
* FLIGHTS OF FANCY : The Story Of Albert Spanswick
* BOOK CHAOS : Keeping Track Of The Lines
* LET IT SNOW : Screensaver Of The week
* BLOGGERS OF THE WORLD UNITE : The AGM Of The YCIB(S)B.
* BY THE PASS OF THE SCANNERS' BEAM : Old Negatives, Freshly Scanned.
* WEEKLY PUB QUIZ : Ten questions to test your inconsequential knowledge.

The full copy for all these stories can be found by clicking on the Read More >>  link. 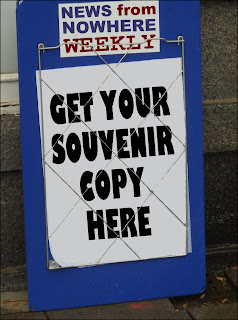 Those with good memories will recall that last month I tried, as an experiment, posting to the Blog on a daily basis. The results were a case of acute exhaustion and a reading experience that was about as weak as a pint of John Smith's Bitter. However, 2013 is the International Year of Experimentation and I will keep changing the format of my Blog and my posts until I find a style that is both sustainable and mildly interesting.

Therefore, for one month only, I am delighted to introduce you to NEWS FROM NOWHERE WEEKLY which contains all the goodness of your daily blogpost packaged and presented on a weekly basis. That doesn't mean that there will merely be a single, static post every week : just like mould on stale bread, News From Nowhere Weekly will be evolving, growing and changing on a daily basis. 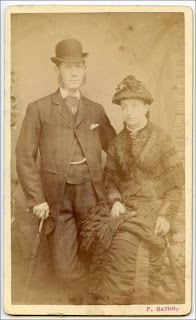 The picture, taken in 1897, shows Albert Spanswick with his wife Gertrude. By the time this photograph was taken Albert was a successful travelling salesman for the Co-operative Wholesale Society, selling tea to local co-operative societies in East Lancashire. Albert always prided himself on his appearance and would often tell Gertrude that "no grocer would buy from a scruffy salesman". So Gertie would always try to ensure that Albert's clothes were clean and well presented and devoted the rest of her time to ensuring that the same could be said about their house, on Emberson Terrace, Cheadle. They never had children - "it is what God had decided and they had accepted", she would say later in life - but they led an active and respectable life, an important part of their wider family and local chapel congregation.

In 1905, seven years after this photograph was taken, Albert decided on an important change of career and left the Co-Op to open his own small grocery shop in Marple. Gertrude would help out in the shop and continue to ensure that Albert was smartly turned out to greet his customers. Albert was excited by the new venture and believed that it was the first step towards establishing a small chain of local grocery shops in the Manchester area. Gertrude was excited because Albert was excited.. Tragedy, however, struck just two years later when Albert was diagnosed with tuberculosis. He died in Halt Hill Sanitorium in April 1908. His illness meant that he had been unable to keep up with his business and, following his death, Gertrude had to sell up before moving back to Cheadle to live with her sister, Ethel, and her family.Ethel's children remember "Auntie Gertie" as a quiet, rather reticent, old lady whose eyes could occasionally light up with the dream of what might have been. She lived to an old age, eventually dying in 1948 at the age of 86. A small group of people from the local chapel attended her funeral, although few knew her. 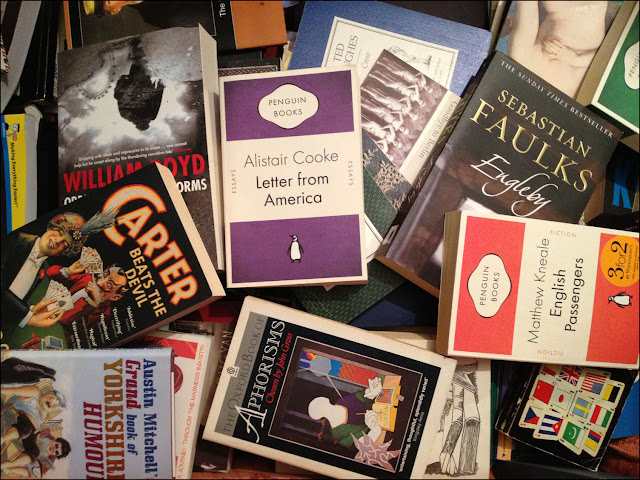 My life seems to have been dominated by books over recent days as those usual warring parties - digital downloads and dusty paperbacks - have conspired together and marched under the banner of Universal Chaos. My collection of Kindle downloads has now reached such a scale that I am not sure what is within the little machine; what I have read and what I haven't, and what is waiting for a period of philosophical retrospection and what has been lined up for a holiday beach. The on-board Kindle Library Apps are less than perfect and tend not to work on things like my iPad and iPhone. 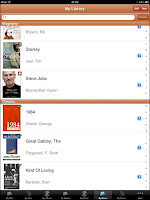 At the same time, I started Spring cleaning my bookshelves and finished surrounded by a pile of books that threatened to encase me like Richard III in a Leicester Car Park. The problem with bookshelves is that they are quite wasteful of space in that they only really work if books are kept one layer deep. I have come up with a possible solution to both problems, although at the moment it is still a work-in-progress. I have acquired a useful little App called My Library which allows me to create a database of both my eBooks and my real books. Entering the information is easy, all you need to do is to provide an ISBN number (or scan a barcode) and the App will work everything else out. You can even allocate an entry a specific location, so real books can be stacked in layers. You can allocate books to collections and lists and therefore easily find what is next on your "to-read" list. So far I have managed to enter my library of some 130 eBooks to the database. Now I need to face up to my mountain of real books.
---------------------------------------------------------------------------------------
LET IT SNOW
Screensaver Of The Week 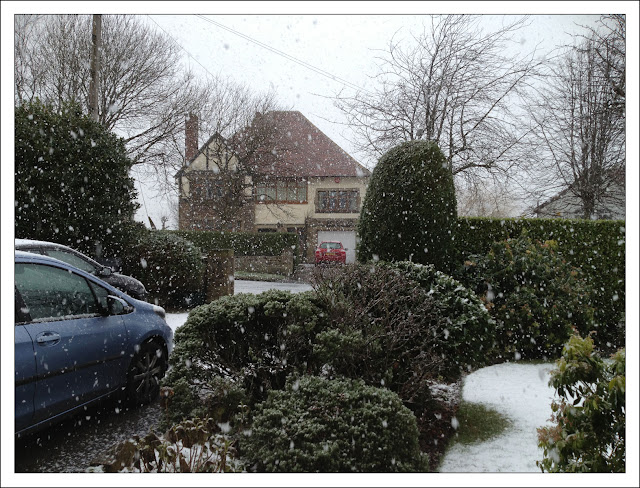 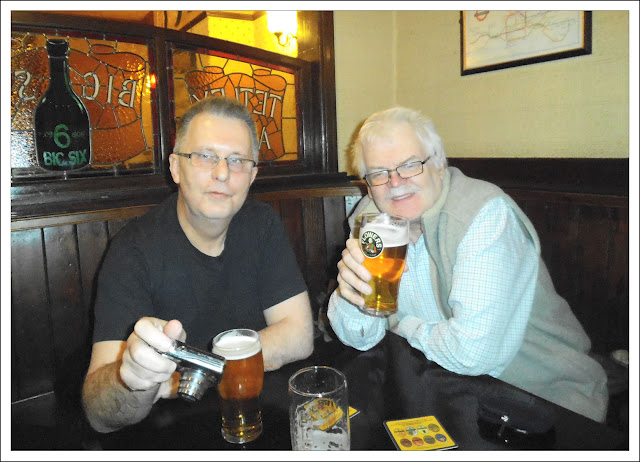 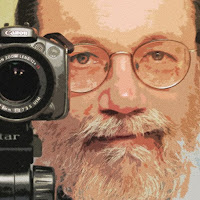 The inaugural meeting of the Yorkshire Chapter of the International Brotherhood (Sisterhood) of Bloggers took place at the Big Six Inn, Halifax, last week and rarely have so many Bloggers been gathered together in one place. There was Tony Zimnoch and me, and ... Tony and me, and ..... well there were a couple of other friends as well but they weren't actual Bloggers. There was a full agenda to drink and we only managed to get through it by dedication and hard work. One item of business that does stay in my memory was that we unanimously decided to award the Holroyd-Hebblethwaite Trophy for 2013 to that fine pictorial Blogger, Roy Hillbinger. A worthy winner indeed. I am sure that we agreed on a date for the next meeting of the Chapter, but I must confess that by then, my memory was beginning to fade slightly.

BY THE PASS OF A SCANNERS' BEAM
Unknown Road, Beacon Hill, Halifax 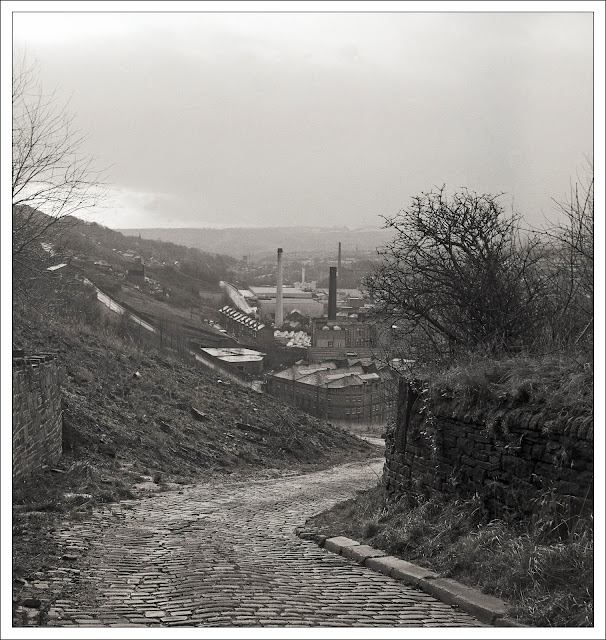 This particular road was already abandoned when I took this picture some thirty or thirty-five years ago. If you look it up on Google Maps now it is nothing more than a shadow on the hillside where the tree-line hesitates. At one time it would have had houses and traffic and life: iron-soled clogs would have sparked fire off those stone cobbles as workers descended the steep hillside towards the mills and factories of Halifax. It is wonderful how old memories can lie sleeping, encased in cellulose acetate, only to be wakened by the pass of a scanners' beam.

Answers will be posted next week.