Our prompt for Sepia Saturday 178 features a face, and this, in many ways, is an easy challenge because the human face must be one of the most photographed subjects of all time. I have chosen a triptych of sepia faces, none of whom are known to me, but all of which feature somewhere or other in my collection of old photographs. They are from different times and different places, but they all have a story to tell if we care to dig below the surface of the photographic emulsion. 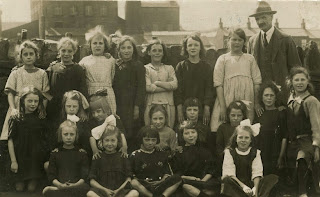 The first face comes from an old school photograph which must date back to about 1920. My mother is elsewhere on the photograph, but today I want to focus on just one of the other faces : the girl on the back row on the left. It is a lovely classic face, the kind of face that could equally grace a mill-workers' daughter from Bradford, or a young lady from a country house. There is a determination within her features, a determination which would no doubt lead her somewhere in life. The demographics mean that it is almost certain that her life is now over. One longs to know what kind of life that was. 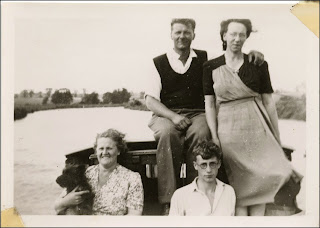 My second face belongs to a generation later. It appears in a photograph that features my Auntie Miriam (that's her at the left with the dog), but my Uncle Frank's usual obsessive cataloguing has failed to offer a clue as to who the young land might be. I suppose the photograph dates from around 1950, so there is a fair chance that the lad - now a man - is still alive. In place of the determination in the first face, I see an element of introspection and possibly sadness. Perhaps it is my imagination that is running away with itself, perhaps the lad went on to enjoy a happy and prosperous life. Now as I look again, there is a passing resemblance to a young Eric Morecambe, although there is little sunshine in his smile.

For my third face we need to go back to the late Victorian period and this fine old Cabinet Card from the studio of A J Anderson in Luton. Once again, I have no idea who the lady is : I bought the photograph in a second-hand shop. In many ways it is more difficult to read this face : are we seeing pride or modesty, certainty or doubt? We get fewer clues from such studio portraits : it is almost as though the photographer is air-brushing out personality as well as blemishes. You might imagine that the whole concept of air-brushing is an invention of the digital age and the celebrity magazine. However, when I scanned the photograph and dug down deep into the pixels, I discovered evidence that this particular Victorian photographer was more than happy to lighten a shadow under the eyes or lengthen and thicken an eyebrow. 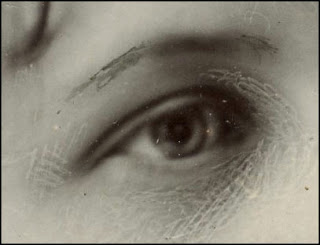 Such things are all part of the story of the face.

To see more aspects of the Sepia face, visit the Sepia Saturday Blog and follow the various links you will find there.
at May 25, 2013