The Lost Pubs Of Brighouse : No. 6 The Thornhill Arms Inn, Rastrick


No. 6 : The Thornhill Arms Inn, Rastrick 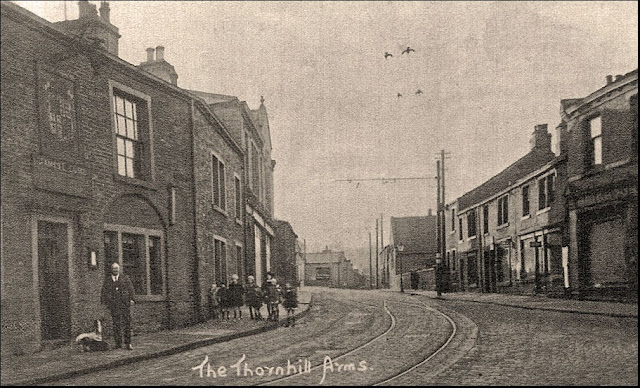 Very often, local history is a history of names. Each area, each parish, each township has its names; names that stretch back into antiquity like historical tendrils. This particular part of Yorkshire is no exception: the Sykes, the Holdsworths, the Berrys, and the Hansons populate graveyards like wild poppies in a meadow. And the names of the more prominent families - the landowners like the Savilles, the Armitages and the Thornhills - grace many an Inn sign in the streets and squares of West Yorkshire towns. 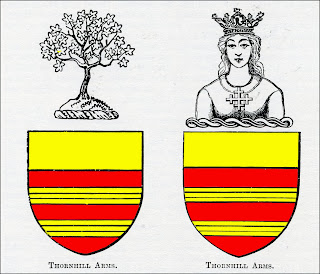 The Thornhill family was a particularly important one in the area south of Brighouse. The Thornhill estate used to own - and to a certain extent still does - many of the acres that sweep up the hillside from the Calder Valley in the direction of Fixby Hall - at one time one of the families great houses and these days the base of Huddersfield Golf Club. The family consolidated their hold on the area in 1365 when Richard de Thornhill married Margaret de Totehill, the daughter of another prominent landowning family. The importance of the family is ingrained on the local terrain : with its Thornhill Briggs, its Thornhill Road, and its handful of Thornhill Arms. 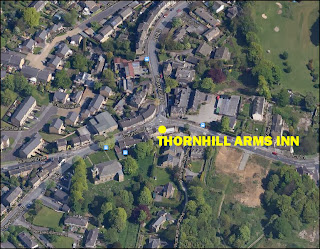 The Thornhill Arms we are interested in today is the one that was once one of the most prominent locations in Rastrick, a building that still stands at the junction of Church Street, Ogden Road and Thornhill Road. It has not been a pub for some 75 years. Until recently it was a residential nursing home. Today it is empty and for sale.

Nobody can seem to agree when the Thornhill Arms was built. Some suggest it was opened in 1858, but there are records of a Thornhill Arms Inn in the area before that date. The 1850s were an important decade in the development of the pub, however, because by then the Thornhill Road which passes the pub had developed from being a private road owned by the Thornhill Estate into a major highway leading into the now rapidly developing town of Brighouse. Rastrick, a more ancient settlement than its upstart neighbour, was by then being dragged into the nineteenth century by the proximity of busy, industrial Brighouse, and the Thornhill Arms was been taken along for the ride.

In the latter half of the nineteenth century, much of life in Rastrick revolved around the Thornhill Arms. It was here that the committees met, the societies ate, the singers sang and the politicians plotted. It was also here that, every six months, the local tenant farmers of the Thornhill Estate would gather to pay their rent, an occasion that was usually followed by a celebratory meal washed down by flagons of ale. The Thornhill Arms was a substantial building and there are several records reporting that well over 100 people would sit down for a meal. When the Oddfellows gathered in 1873, there may not have been that many eating, but the description of the occasion which appeared in the Huddersfield Daily Chronicle sums up the nature of the place. 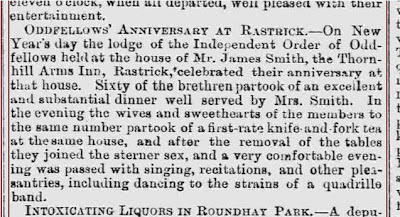 "ODDFELLOWS' ANNIVERSARY AT RASTRICK - On New Year's day the lodge of the Independent Order of Oddfellows held at the house of Mr James Smith, the Thornhill Arms Inn, Rastrick, celebrated their anniversary at that house. Sixty of the brethren partook of an excellent and substantial dinner well served by Mrs Smith. In the evening the wives and sweethearts of the members to the same number partook of a first-rate knife and fork tea at the same house, and after the removal of the tables they joined the sterner sex, and a very comfortable evening was passed with singing, recitations, and other pleasantries, including dancing to the strains of a quadrille band." 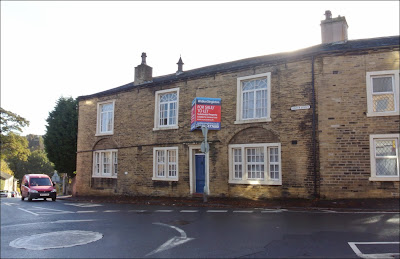 James Smith was the celebrated landlord of the Thornhill Arms between 1867 and 1881. He was also a local farmer and, some records suggest, a butcher as well. His wife Ellen is often recorded as serving memorable dinners and suppers for local gatherings, and it is clear that the family were well placed to monopolise the entire supply chain of the feasts.

As with so many local pubs, business in the twentieth century was a continuing struggle. By then, both Brighouse and Rastrick had its supply of public halls and municipal buildings and such inns as the Thornhill Arms were being reduced to little more than drinking venues in competition with an abundance of local beerhouses and taverns.  In 1938, the Thornhill Arms Inn closed for the last time and now the building stands empty. But as I passed it this morning to take the above photograph, I am sure I could still hear the echo of the strains of the quadrille band.
at October 30, 2013