The Delicate Wife Of Wentworth Woodhouse 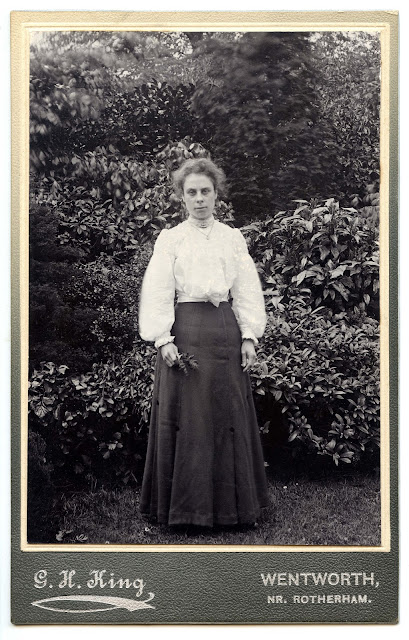 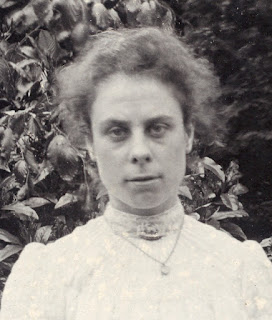 This interesting Edwardian Cabinet Card photo was part of an album of old photographs I bought from an antique shop a few years ago and which I have only recently started investigating in detail. The photographer is "G H King of Wentworth, Near Rotherham" (there are no studio details on the reverse of the card), but I have not been able to find any record of a professional photographer of that name and location from the time the photograph must have been taken. There is, however, evidence of a certain George Henry King who was born in Conisbrough - a couple of miles up the road from Wentworth - and who, in the first two decades of the twentieth century, lived in Barrowfield Gate in Wentworth. I know Wentworth quite well and it is a small village, so the chances are that this is the same person.

In both the 1901 and the 1911 census, George Henry is listed as being employed as a "carter in gardens". Wentworth is particularly notable for being the location of Wentworth Woodhouse, the massive country home of the Wentworth family and famous for being the largest private home in Britain (The full and fascinating story of the house and the people who lived in it can be found in the book "Black Diamonds" by Catherine Bailey). I suspect that we are safe in assuming that G H King worked in the gardens of Wentworth Woodhouse and also was a keen amateur photographer. The fact that the photograph was taken by an amateur is consistent with it being taken out of doors rather than in a studio setting. Enterprising amateurs would have cards pre-printed with their names onto which they could stick paper photographs, thus producing the Cabinet Card format that was popular at the time.

So who is the woman? The census records show that George was married to Laura Louisa King who was born in Occold, Suffolk in 1875. The fact that she found herself living so far away from home makes me suspect that she may have worked in some capacity in the great house at some stage, and that the photograph of her was taken by her husband in the grounds. The only other reference to G H King I have been able to find is this advert from the Lincoln, Rutland and Stamford Mercury of the 23rd August 1907.

Could this then be a photograph of Laura Louisa King, the delicate wife of Wentworth Woodhouse? Who knows - much of this tale is based upon guesswork and casual assumptions. If it is, however, we can take pleasure in noting that whilst George died in 1934, his delicate wife soldiered on - bringing up five children - until she died at the age of 76 in 1951.